UCSD Linguistics Emeritus professor David Perlmutter has been elected to the American Academy of Arts and Sciences.  Congratulations, David! 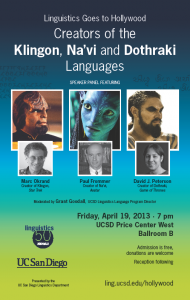 Please join the us Monday, April 15, 2013 at 2 PM in AP&M 4301 for the Linguistics department’s colloquium. Daphna Heller (University of Toronto) will be presenting.

On the probabilistic nature of referential domains: evidence from mismatched perspectives

Theoretical approaches to reference assume that definite descriptions such as “the duck” are used to refer to a duck which is uniquely identifiable relative to a set of entities defined by the situational context.  Thus, the interpretation of definite descriptions crucially depends on listeners’ ability to correctly construct this situation-specific “referential domain”.  While there is considerable experimental evidence that listeners are indeed able to use various types of information to construct referential domains in real time, some evidence seems to suggest that information about the other interlocutor, i.e. information about what is in common ground, is not used in this task. In other words, evidence in the psycholinguistics literature is mixed regarding whether listeners incorporate the distinction between common and private information in the earliest moments of processing.

In this talk, I will review some of these apparently-contradictory results (Keysar et al., 2000; Heller et al., 2008), and argue that they reveal the probabilistic nature of referential domains. Specifically, I propose that instead of selecting one of several competing domains, listeners simultaneously consider more than one domain, weighing their relative contribution. I present data from two experiments in support of this approach, and discuss the implications for our understanding of referential domains more generally.

Welcome to the blog of the UCSD Department of Linguistics.
For more information about our department, visit our home page at:
http://ling.ucsd.edu/