Graduate student Alex Rodriguez and faculty Grant Goodall are presenting on Clitic Left Dislocation in Spanish: Island sensitivity without gaps at CAMP[5] (5th California Meeting on Psycholinguistics ), which will be held at UCLA on January 28-29, 2023.

Faculty Ivano Caponigro has just accepted the invitation to join the editorial team of the journal “Linguistics and Philosophy” as an associate editor.

San Diego Linguistics Papers 12 has been published. It contains the paper “The second generation of “New Shanghainese”: their language and identity” by Shihong Weng. It is available here: http://grammar.ucsd.edu/sdlp/current.html

Graduate student Emily Davis presented both a talk and a poster at the Linguistic Society of America Annual Meeting 2023 in Denver, which was held January 5-8, 2023. The title of the talk was “Multiple center-embedding is more common in verb-final languages” and the abstract can be seen here. The poster was entitled “Learnability and emergence of dependency structures in an artificial language”, the abstract can be seen here, while the poster is below. 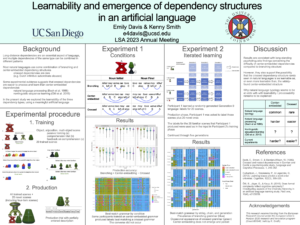 Faculty Ivano Caponigro and Anamaria Fălăuş (CNRS, Nantes) gave a talk at the Amsterdam Colloquium 2022, which was held in Amsterdam on December 19-21, 2022. The title of their presentation was “The semantics of Rudin constructions in Romanian”. The paper is available here.

Faculty member Michelle Yuan is one of the invited speakers at the 26th Workshop on Structure and Constituency in Languages of the Americas, to take place at McGill University on April 28-30, 2023.

Faculty Ivano Caponigro is an invited speakers at the 33rd meeting of the annual conference Semantics and Linguistic Theory (SALT 33), which is organized at Yale University on May 12-14, 2023.

Faculty member Michelle Yuan has a new paper in Language:

Although the Inuit language is generally characterized as ergative, it has been observed that the ergative case patterning is relatively weaker in certain Eastern Canadian varieties, resulting in a more accusative appearance (e.g. Johns 2001, 2006, Carrier 2017). This article presents a systematic comparison of ergativity in three Inuit varieties, as a lens into the properties of case alignment and clause structure in Inuit more broadly. Building on the previous insight that ergativity in Inuit is tied to object movement to a structurally high position (Bittner 1994, Bittner & Hale 1996a,b, Woolford 2017), I demonstrate that the relative robustness of the ergative patterning across Inuit is tightly correlated with the permissibility of object movement—and not determined by the morphosyntactic properties of ERG subjects, which are uniform across Inuit. I additionally relate this correlation to another point of variation across Inuit concerning the status of object agreement as affixes vs. pronominal clitics (Yuan 2021). These connections offer testable predictions for the status of ergativity across the entire Inuit dialect continuum and yield crosslinguistic implications for the typology of case alignment, especially in how it interacts with the syntactic position of nominals.

This paper, which is part of a special issue in JASA called “Reconsidering Classic Ideas in Speech Communication,” revisits the use of the acoustic measure H1–H2 for characterizing phonation types, and proposes a new measure that is argued to be better for measuring creaky voice in particular.