Now, I understand the inevitability of hate speech to circulate the internet. But I would expect it most to be targeted towards political ideas, political groups, morally excluded groups, and even celebrities. But an average person like me – minding her own business by reblogging aesthetically pleasing photographs, often posting “selfies”, or sometimes just writing out my current thoughts?

I am one of millions who own a Tumblr account. By no means am I attempting to brag, but over the span of about 4 years I have somehow accumulated nearly 10,000 followers. This prominent online presence has also transmitted to my Instagram. I don’t receive any hate on Instagram, but I definitely have gotten my fair share of hate on Tumblr. And I’ve narrowed this down to one main reason: Tumblr’s “anonymous” option. (Warning: Offensive material follows) 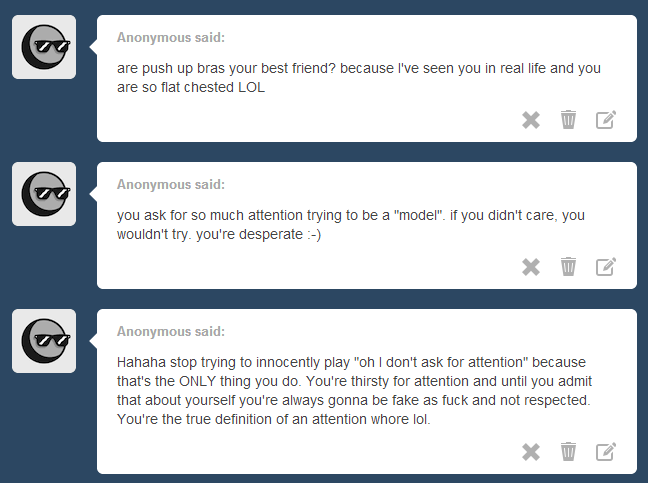 I think it’s safe to assume that people feel much safer spreading hate under the benefit of anonymity. Even if there were no existence of an anonymous option, generalizing this to all websites, there is still some privacy connected to posting on the internet. People can create usernames that don’t give away their actual information, and they can even use pictures not of themselves. Anonymity necessarily need to have a label over it, like Tumblr does.

Anyway, “sticks and stones may break my bones, but words will never hurt me”. Because of the abundance of hatemail I’ve received, it conditioned me to feel noting towards it. No matter how offensive the content is, I’m never offended – I laugh it off.

Should hate speech really be restricted? I don’t think so. These people can say all they want. It’s a matter of ignoring the vulgarity instead of letting it affect you. People will have their opinions.