Ebola virus disease is known as Ebola haemorrhagic fever, it often causes fatal illness in humans. Ebola breaks out into the human population through contact with infected animals’ blood, secretion, organs or other bodily fluids. In Africa, the infection is reported through dealing with infected chimpanzees, gorillas, fruit bats, monkeys, forest antelope and porcupines ill or dead or in the rainforest (WHO). At least 729 people living in West Africa; Guinea, Sierra Leone, Liberia and Nigeria, have died (NY Dailynews).

Currently, American doctors and workers are sent to take care of patients and eliminate Ebola virus disease. While they were helping relief activity, two American people got the Ebola virus and they are going to receive treatment in the United State. When many American people in the U.S. are anxious about contagiousness of the Ebola virus by the news, some of them started to express their feeling on social media;

“The government that can’t keep track of its own emails wants us to trust they’ll keep a deadly virus perfectly secure,” Twitter user @ernhaust wrote.

Donald J. Trump argued, on Twitter, “The act that we are taking the Ebola patients, while others from the area are fleeing to the United States, is absolutely CRAZY-Stupid pols. The bigger problem with Ebola is all of the people coming into the U.S. from West Africa who may be infected with the disease. STOP FLIGHTS!”

The messages are provocative to draw attention from the public.  Especially, Donald’s comment, as a celebrity, exerts his influence to the public rather than other people. They are saying like the Ebola virus will spread out in the U.S. as soon as the patients come to the U.S., and people are in danger of infection. However, Dr. Amar Safdar, associate professor of infectious disease and immunology at NYU langone Medical Center, mentions;

“It’s not like influenza or tuberculosis where you just have to be close to someone and breathe in the same air in a confined space” and “It’s not easily transmitted.”

Also, the patients are specially transported by The Aeromedical Biological Containment System (ABCS); it will isolate them from other passengers or air crew. 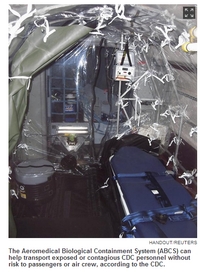 Social media tends to make the Ebola virus disease more serious in the U.S. We do not actually have to be worried about the infection of Ebola virus. Some people may be outrage coming from fear, so they write furious feeling on social media such as “STOP FLIGHTS!” Individual fear of the infection appears in public through social media, it makes rumor and collective rumor stir up the popular confusion. In addition, opinions of influential people such as celebrities or politicians, seems more credible even if it is not true. People receive news and individual opinion from social media; however, many people overlook professional opinion with scientific proof, and they judge the news with others’ opinion with emotion. As a result, people acquire subjective knowledge from social media, regarding as an objective information.

The patients were two American humanitarian workers in order to take care of other patients before they get Ebola virus in West Africa. I watch them as not just the patients having Ebola virus but Americans at the risk of their life to save other people in other countries.  They have to come back hometown, now.

2 thoughts on “Ebola on social media”