Since we talked about free speech in class, I thought it would be interesting to bring up media censorship in China. China, technically a communist country, has always enforced policy that restricts the freedom of speech on all media outlet. Everything that goes on the Internet will be censored before it can be released.

In December 2013, China’s ruling Communist Party stated that the Government of China will be promoting “core socialist values” and strengthening management of the “wrong points of view” on the media because allowing media independence has lessened the government control over media in China.

Due to the censorship in China, people in China are confined to the information their government allow them to have access to. I met several people from China in high school, almost all of them do not know about what actually happened at Tiananmen Square Protest. 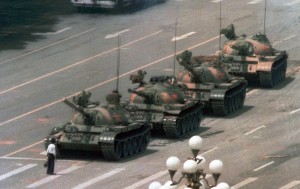 Children in China that were born after the Tiananmen incident have no access to the news on the Internet or through any media since everything that is reported in “a wrong point of view” will be censored. They never knew about the cruel things the government did on that day such as tanks running over the student protestors until they got the full access to the uncensored point of view news when they came to America. A friend of my mom’s told me that she was going to the protest with her classmates but the government of China sent out troops to prevent more students from going to Tiananmen for the protest.

One thought on “Media Censorship in China”