If you have seen the movie, “The Purge” or the sequel “The Purge: Anarchy”, a real life purge was initiated on August 15th in Louisville, Kentucky. Early last week, a unidentified teenager mass spread on Twitter a real life purge in his home town. The message was circulated on Twitter and Facebook including some images of a mock up flyer resembling the films promotional artwork. 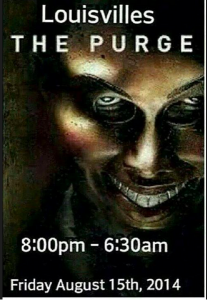 The concept of the Purge movie is that there’s a certain period of time where people can get away with any kind of violence or crime. This concept started a whole night of fright of a city wide purge in Louisville. The viral hoax was touched upon by local officials last week as well as various social media platforms. 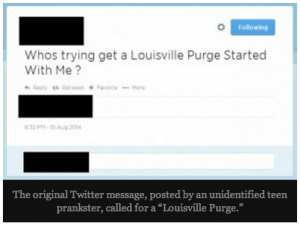 A live blog was created by Rob Fee documenting all the events that happened during the time span of Friday 8pm to Saturday 6:30am. In addition, a live police radio communication was available online  for updates that was trending on Twitter by the hashtag, #louisvillepolicescanner.

A local high school football game was postponed due to the possible “purge”. Thankfully there was no major incidents that happened during the night. However, there were two shootings that happened on that Friday night but neither could be connected to the hoax. Due to the threats of the purge, people of Louisville chose to stay home from other Friday night activities and experts expect “real economic impact” from the threats and damages as result of the purge.

It is amazing how the speed of news coverage and information spread causing panic. This poses questions regarding the dangers of social media and the manner of utilizing free speech. In addition, the social media outlet in regards to spreading this hoax demonstrates how powerful the medium can be in transmitting the messages. Especially to the world via internet, the amount of participation and awareness generated by a single tweet from one teenager displays the consequences and effects of media.