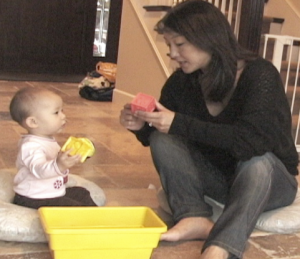 By their second birthday, healthy toddlers show wide variation in vocabulary size, ranging from just a handful of words to hundreds. This is of concern because vocabulary is the best available predictor of later school success. [This does not mean that a larger vocab makes you a good student – it’s only a correlation.] Infancy researchers are trying to predict these differences in early vocabulary. One factor is how much parents talk to infants, as shown by Hart and Risley (1995). We also find that mothers’ speech during free play modestly predicts infants’ later language scores (Chang, Wade, Robenalt & Deák, 2014). But parental speech is not the only factor that matters. Infants also bring individual differences to the task of word learning.

For the MESA Project Longitudinal study, we recorded infant-mother play at home, monthly, from 4 and 9 months and at 12 months. Also, infants came to the lab monthly to do behavioral tests including a test of contingency learning. In this test (see picture at left) infants saw one of two shape cues (call them ‘A’ and ‘B’ – see examples below) in the center of a screen. Whenever cue ‘A’ appeared, after a brief delay a ‘reward’ target animation (call it ‘alpha’) would play to the left or the right (same side each time, but counter-balanced). After cue ‘B’ appeared, a different target animation (‘gamma’) played on the other side.

After seeing enough sequences you might start to predict which target would appear after each cue. Infants learn this, too, to varying degrees. Those who learn gradually start turning to the correct side faster even, sometimes, before the target appears! Such ‘anticipatory gaze-shifts’ show that the infant has learned.

Ellis, Robledo-Gonzolez, and Deák (2013) found that infants who responded faster to the cues at 6-7 months old had larger vocabularies at 22 months old – measured both by parent-reports of words understood and words produced, and by a behavioral word-comprehension test. Notably, we had also transcribed mothers’ speech-quantity (from the 12-month home visit), and collected standard infant cognitive-functioning scores as 3 and 12 months, and ruled out that either maternal ‘talkativeness’ or infant cognitive status could explain the relation between infant response speed in the contingency-learning test, and vocabulary size 14 months later. Importantly, the infant test did not assess language or even auditory processing — it was a visual task. This suggests that between-infant differences in generalized processing speed can predict some variance in later language outcomes.

One thought on “Infant Cognition and Vocabulary Growth”