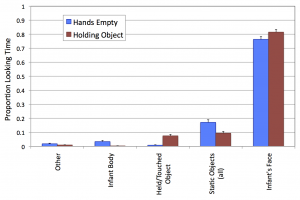 Infant-parents play is cute and fun to watch, but it also provides a unique window into the complexity of social ‘co-direction’ of action. So, our painstaking work is to document the details of play actions. Parents and infants will produce a wide variety of behaviors at different rates and sequences, and those behaviors are affected by many contextual factors (e.g., mood, environment, other participants, etc.). Underneath this variability, though, parents’ behaviors might be regular enough for infants to learn to make probabilistic predictions about parents’ next moves. For example, this graph shows the distribution of parents’ looking times to different targets during naturalistic play from a recent study. What are the ramifications of parents’ tendency to focus so much on their infant’s face?

We studied how infants could learn social skills from parents' structured behaviors,
specifically from parents’ looking patterns and handling of objects during face-to-face play. Deák, Krasno, Lewis and Treisch (2014) showed that although parents mostly look at their infant’s face, and infants almost never look at their parent’s face, when infants do look at the parent’s face and the parent is not looking at the baby, the parent is usually looking at her hand(s) and what she is holding. We also showed that infants from 3 to 11 months are extremely interested in this sight — that is, adults manipulating objects. Through careful conditional-probability analyses, we showed that parents in this way provide enough structured information, in their actions, for infants to learn to follow their direction of gaze.
Triadic interactions start around infants' first birthday: What are they, and where do they come from?
In triadic interactions, parents and infants fluidly shift attention between each other and shared objects (like toys). Some researchers argue the infants can only do this only after they have developed high-level social understanding –for example, the idea that other people have interests and can attend to things.

Another possibility is that infants gradually develop…triadic interaction skills as they learn to divide their sensory-motor modalities (e.g., holding different objects in each hand, and looking between them) and therefore divide their attention. This also depends on parents responding to their infants’ expanding ‘multi-tasking’ abilities. In fact, de Barbaro, Johnson and Deák (2013) found that parents of 4-month-olds tend to govern infants’ attention to objects: when the parent presents a toy, the infant goes ‘all in,’ using both hands, eyes, and even their mouth to focus on that toy until the parents presents a new toy. But gradually, at 6 and 9 months of age, these interactions become ‘negotiations’ of attention, with infants shifting gaze between objects and or holding on to their own object while watching the parent’s object…and most parents start to let their infant control the flow of play.