The Dyadic Electrophysiology and Behavior (DEB) facility is equipped with an eight-camera Optitrack motion tracking system (http://www.naturalpoint.com/optitrack/). The facility also has wo 64-channel Brain Products actiChamp systems (http://www.brainproducts.com/productdetails.php?id=42). These amplifiers are synchronized with each other, with the motion tracking system and a four-camera system, and with a touch-screen table on which dyads can play games. The input (i.e., experimental stimuli) and output are all coordinated through Lab Streaming Layer software created at the Swartz Center for Computational Neuroscience.

The DEB testing room has five digital cameras that send synchronized, time-stamped, NTSC video to be captured on a computer RAID, and displayed on monitor in an adjacent control room. This facility also has a custom video system for presenting video, images and sound to any of six monitors or a projector screen. 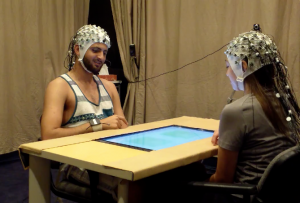 The lab has a variety of behavioral tests, including testing paradigms developed in our previous studies, and standardized tests including the BSID-3, EVT, MCDI, KRISP, PPVT-III, Token Test, Woodcock Johnson, WCST, WPSSI, and others.