It is often stated that children are precocious language learners, and word learners. Although children typically learn many words between 2 and 5 years of age, misleading claims are often made regarding this: In fact we know embarrassingly little about the rate at which children acquire words. For example, we do not know whether, in a ‘head-to-head’ test, children learn words faster than adults, or how many times children must hear a word before they have some lasting memory for the word.

We have shown that young children often are rather slow to learn words, and actually are faster to learn other kinds of information than words, in carefully controlled tests.

An early study (Deák & Wagner, 2003) showed that 4-5-year-old children were slow to learn several new words for novel “creatures” in an attractive play-set. During two play sessions the experimenter named the categories in controlled but conversationally natural ways, mentioning the features that defined each category and encouraging children to repeat the names. Yet after hearing the words more than a dozen times, with clear examples, definitions, and encouragement, 4-5-year-olds had learned only about one out of four words, and did not even know which features were important for that category. The task was not especially difficult: 6-7-year-olds could learn most of the words and definitions, given the same experience. This finding made us question whether young children are actually precocious at figuring out word meanings.

We then did a series of studies (Deák & Toney, 2013) to investigate  fast mapping – a presumed ability of children to learn words after one exposure – plus other purported word-learning tendencies like the mutual exclusivity bias (an assumption that each thing has just one word) and the taxonomic bias (an assumption that words refer to categories). To test whether these traits are specialized for word-learning, we taught 3- to 5-year-old children either words, facts, or pictograms (i.e., abstract graphical visual symbols; see Figure)  for unfamiliar objects (see Figure).

Novel objects from Deak & Toney, 2013. Children were taught words, facts, or pictograms for the objects.

In three experiments we found no evidence of specialized word learning:

Conclusion: In a ‘head-to-head’ test, children learned new facts, or new pictograms, as fast or faster than words. There was no evidence that children used any different biases to learn words than to learn facts or pictograms. They just did not learn the words as quickly.

Another question: are children really like ‘little sponges’ that learn new languages much better than adults do? We tested this by giving a group of adults the same word-learning test. Adults vastly outperformed children, learning words much faster and more accurately. Of course, word learning is only one aspect of language learning, but in that aspect at least, children are perhaps a bit more like sieves than sponges. 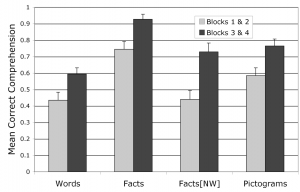 Recognition memory accuracy scores of children in Deak and Toney (2013), Exp 1, after 1 and 2 exposures to words or facts or pictograms (light bars), and after 3 and 4 exposures (dark bars). ‘Facts [NW]’ were facts with a novel word embedded in them (to control for lexical novelty). See paper for details.