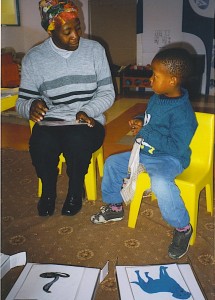 Words are fundamental units of meaning and communication in all languages. Educated adults understand thousands of words and, in fact, most people in the world master the basic vocabularies of at least two languages.

How do infants and children learn words? How does the process of word-learning relate to overall language acquisition? Is word learning “special” — that is, does it differ in crucial ways from other kinds of learning? These questions have been studied systematically for decades, but many core debates persist. Much of our research has been designed to better understand how children’s word learning interacts with other language skills, and how word-learning is affected by general cognitive abilities.

is a longstanding topic of research. From 3 to 5 years children learn a lot about the world, they learn subtleties of their language(s), and they learn hundreds of words. Some scholars have drawn parallels between We agree that there are relations between word learning and cognition, but those relations are complex and not intuitive. Some of our work addressed how cognitive flexibility affects children’s word learning. That work shows wide variability in children’ ability to use changing cues to infer multiple word meanings. Other studies have addressed the speed and specificity of children’s word learning.

Words learning starts during infancy, so we started learning about infants...

and how infants’ characteristics can influence their early language learning. Although ‘infant language learning” might seem like an oxymoron, there is a rich body of research showing that even in the first few months, infants are starting to learn about the sound patterns of their language, and may discriminate a handful of words by their first birthday. However, infants and toddlers vary considerably in their rate of language acquisition. There are probably many reasons for this. Some of those have to do with infants’ traits that affect learning. We investigated one such trait: response speed to novel but learnable events. Does this trait in infants predict how quickly they will learn words?

How do individual differences in auditory processing affect language development?

Can Children Describe Things In Many Ways?

For many years it was believed that young children tend to assume that any given thing has only one label or word. This would certainly be odd for several reasons: most people in the world speak two or more languages, for example, and it is obvious to adults that, for example, a thing might be called “dog,” “Pug,” “animal,” “pet,” and “Princess.” In fact, the idea that children have a so-called mutual exclusivity bias (or ‘one-word-per-object’ bias) is now known to be mostly false. This was shown in studies from our lab (Deák & Maratsos, 1998; Deák, Yen & Pettit, 2001) and several others. We showed unambiguously that 4-year-old children have no difficulty accepting multiple words of different kinds for novel objects and people. It is true that young children are slow to learn new words Deák & Wagner, 2003), but their slowness is not strongly related to any tendency to reject new words for already-nameable items.

We have contributed several reviews and overviews of early language development (like Deák & Holt, 2008), and of specific topics (e.g., brief piece on ‘slow mapping’). Deák (2000) reviewed and critiqued the popular assumption that children have specialized ‘constraints’ for word learning. Conclusion: the concept word-learning constraints is so underspecified that it is uninformative. Worse, it is potentially misleading because it implies a mechanism where none was known. Years later, no evidence that weakens this conclusion – rather, accumulating evidence that word learning is not specialized makes the concept of constraints more likely to mislead.