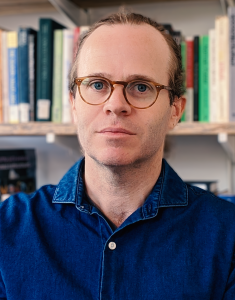 Christo Sims is Associate Professor of Communication at the University of California, San Diego. He also holds affiliations with Urban Studies, Science Studies, Ethnic Studies, and the Design Lab at UCSD. During the 2020-21 academic year, he was an in-residence member of the School of Social Science at the Institute for Advanced Study in Princeton.

A scholar of technological change, social inequality, and social practice, Sims has authored award-winning books and acclaimed articles at the interfaces of science and technology studies, sociology, anthropology, communication & media studies, and urban studies. Trained as a historically attuned ethnographer, his current book project focuses on how regional economies centered on technology production and knowledge work are attempting to sustain economic growth in the face of ecological limits and severe social inequalities. Using Silicon Valley as a case study, the project traces the labor and politics of efforts to develop the technology industry in sustainable and inclusive ways. Previously, he studied how social reformers in the U.S. frequently turn to new technologies to fix educational institutions and uproot entrenched inequalities despite decades of disappointing results.

He first solo-authored book, Disruptive Fixation: School Reform and the Pitfalls of Techno-Idealism (Princeton), won the Best Book Award from the Communication, Information Technology, and Media Sociology section of the American Sociological Association. His most recent work was published in the acclaimed journal Public Culture, and he is currently co-editing a special issue on Science and the State with members of 2020-21 class of the School of Social Science at the Institute for Advanced Study. Sims is also a member of the Social Science Research Council’s Just Tech Network.

Sims teaches courses on practice theory, the climate crisis, social inequality, social movements, moral economies, and the ethics and politics of technology design. Having worked as both an ethnographer and a designer, Sims is a founding member of both the Studio for Ethnographic Design at UCSD and the University of California Collaboratory for Ethnographic Design. He is also a core member of the Nature, Space, and Politics research group.

Raised in rural Northern California, Sims is a Phi Beta Kappa graduate of Bowdoin College. He earned his PhD from the University of California, Berkeley in 2012. He lives in San Diego.