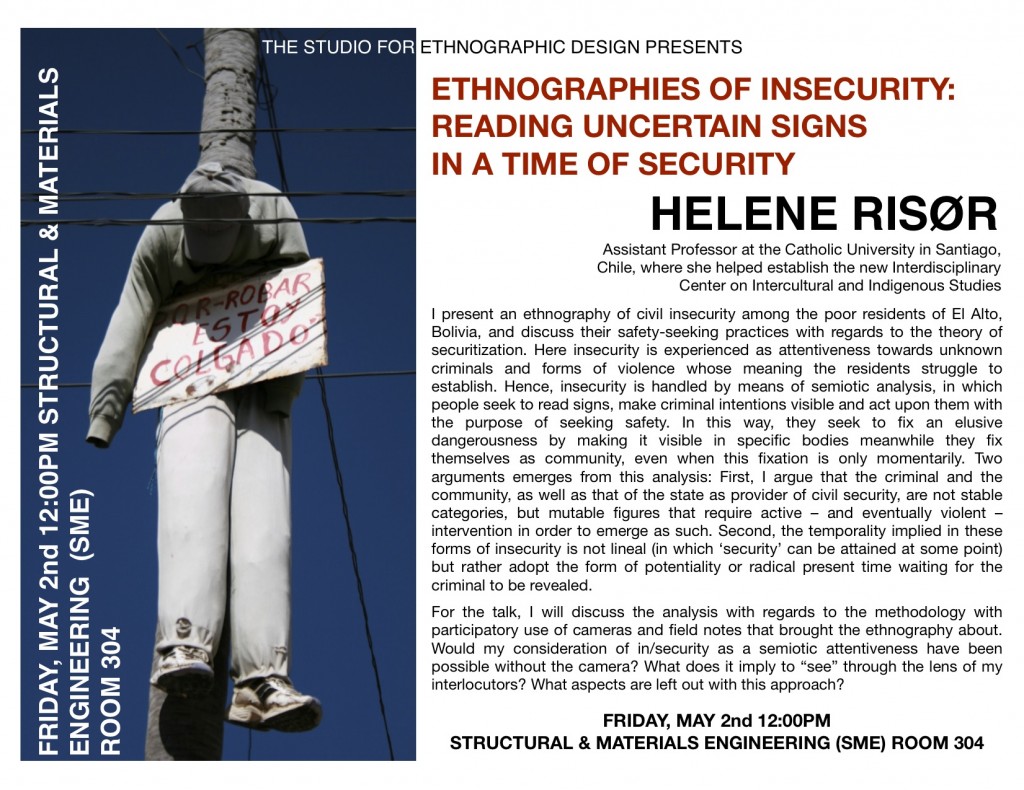 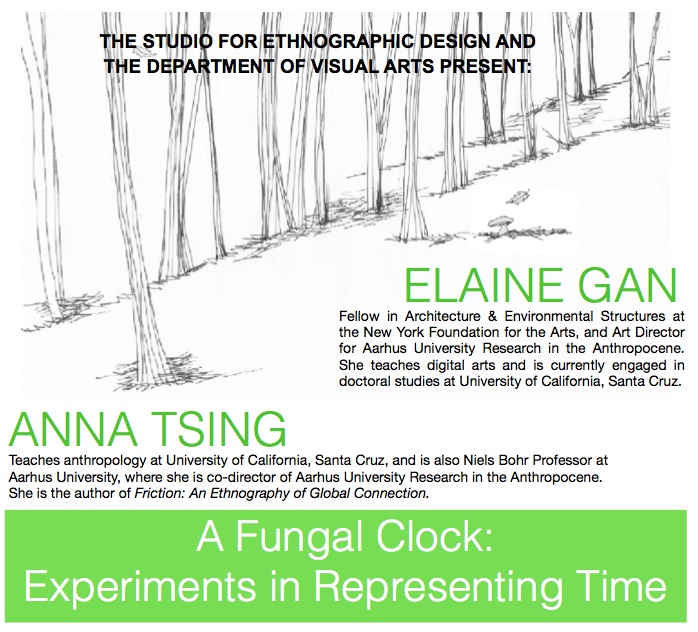 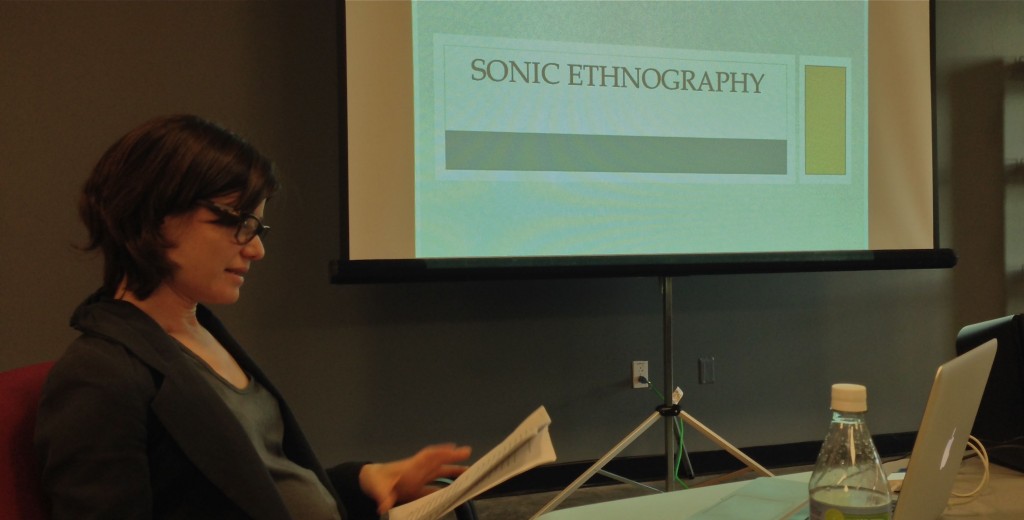 SED’s Feburary 4th event with Marina Peterson and Roshanak Kheshti prompted a lively interdisciplinary discussion of the place of sound in ethnographies past and future. Together, our two presenters marked a path moving away from representational modes and all the associated problems of authenticity, fidelity and objectivity, toward the sensory, experiential and radical.

First up, UC San Diego’s own Roshanak Kheshti presented “Learning from Zora Neale Hurston’s Sonic Ethnography.” She very helpfully began with a kind of reverse genealogy positioning her work in a more general discussion of how to think about listening. Following anthropology traditions perceptions, including aurality, are culturally situated. If we learn to perceive in relationship with out environments, this opens up the possibility for perceiving both differently and intersubjectively.

This also means that there is a relationship between perceiving and power, one that Kheshti grounds in Enlightenment (with the whole “light” part emphasizing the visual as the good). What I find especially interesting here, is how the enlightenment also gave us the ‘fictive’ notion of five separate senses. But not surprisingly, these senses have been subjected to familiar Cartesian hierarchies caught up with Western mass communication and reproduction technologies like the printing press (and with them the privileging of literacy as a measure of civilization). Not only are scholars today adding sensory notions of the kinesthetic (ie. balance) and proprioception (sense of body in space), but they are also considering how senses work in tandem (smell and taste are an especially obvious example here).

In Kheshti’s book Modernity’s Ear, based on ethnographic research at world music company in San Francisco in the early 2000s, she explores listening as a performative action (in the Austin tradition). Her current project is further developing two concepts from the book: first, what she calls the Aural Imaginary, the relationship between listening and fantasy, in other words, how desire is structured in to the act of listening; and second, shared industry and ethnomusicology commitments to fidelity that assume authenticity is not only possible, but the goal.

It is here that we meet the Zoral Neale Hurston as anthropologist. Hurston was a student of the Franz Boaz, who famously urged his students to “Record! Record! Record! meaning faithfully reproduce. But in Hurston’s two recording expeditions in 1935 and 1938 respectively, she does something different, something Kheshti argues not only unique but suggest the radical potential of sonic in-fidelity: instead of recording folk songs in a native context, Hurston records herself singing the songs which you can listen to here. Khesthi asks, can the practice of infidelity challenge the 20th century manufacturing of authenticity? Can it preempt consumptive desires? Whether self-recording was intended as a radical act or not, the results have radical potential, refusing the translating of the other through representational technology for a refractive recording of herself.

Our second speaker, Marina Peterson visiting from Ohio University presented “Sonic Ethnography” (a title we may have ‘borrowed’ for the event), asking how do people listen? What does it mean to hear in everyday life? Peterson’s approach is very much informed by Tim Ingold, working against assumptions that listeners are subjects with ears separate from the surrounding world. Instead, she argues along with Ingold for an understanding of hearing as feeling where sound is not an object but medium: it is what we hear in. Wording is especially tricky here as existing languages tends to reinscribe the sense of sounds ‘out there,’ though Stefan Helmreich’s account of “immersion” helps offer a way through.

Caught up in projects of preservation, field recordings not only tend, but are intended to objectify sound. But what, Peterson asks, might be possible if we move away from representations and consider how field recordings are caught up in the event, in the conditions of their own production? As example, Peterson offers a recording from the Ohio Moonshine (yes, the beverage) festival. Where a more conventional approach might consider the recording as information about how the place sounded, Peterson asks us as listeners to consider how we might get a sense of how people are listening, how people are relating to sound.

As a group we sit and listen to about half of the 12 minute recording, which we’ve been told is of the entirety of the small town festival parade. At first it’s difficult to make out what’s happening just by listening. There are a lot of sirens and big truck horns, people clapping and occasional exclamations like “that’s cool.” But as my ears adjust, I begin to make out more specific details: attributing sirens to firetrucks; noticing the Doppler effect and inferring that the recorder is static, not moving with the parade; a small child crying at the loud noises from the “bad, bad, truck”; making out a conversation between friends in the audience and their increasing excitement as a float they worked on comes in to view and they passes by. In short, even as I first time listener I do glean some sense of how relationships are being enacted through sound.

This listening exercise, in concert with the Hurston self-recordings, prompts all kinds of questions from the audience:

The conversation then returned to questions of method. The first step is to plan methods around questions of sound, but to what extent do we need recording, especially if it is a question of how others listen? Does recording show how people orient themselves through sound, for example when listening in a conversation?

Kheshti points out that track-based recordings and studio techniques isolate sounds in a way that would never exist in reality, and with people doing field recordings editing out some sounds. At the same time, an audience member points out, sensational experiences have to be constructed because raw footage doesn’t work. There have been attempts to invite the musician to do the mixing, but perhaps this is just egalitarian idealism at work as the process of isolation then replication is covered over in the final synthesis.

In any case, I think we all agreed on the worth of considering new starting places for sonic ethnography and the anthropology of sound. Starting places that refused to see (John Cage and field style) recordings as windows to social environments; starting places that start instead by asking fundamental questions about the ethnographic ear, and by making explicit the listening processes of the researcher. 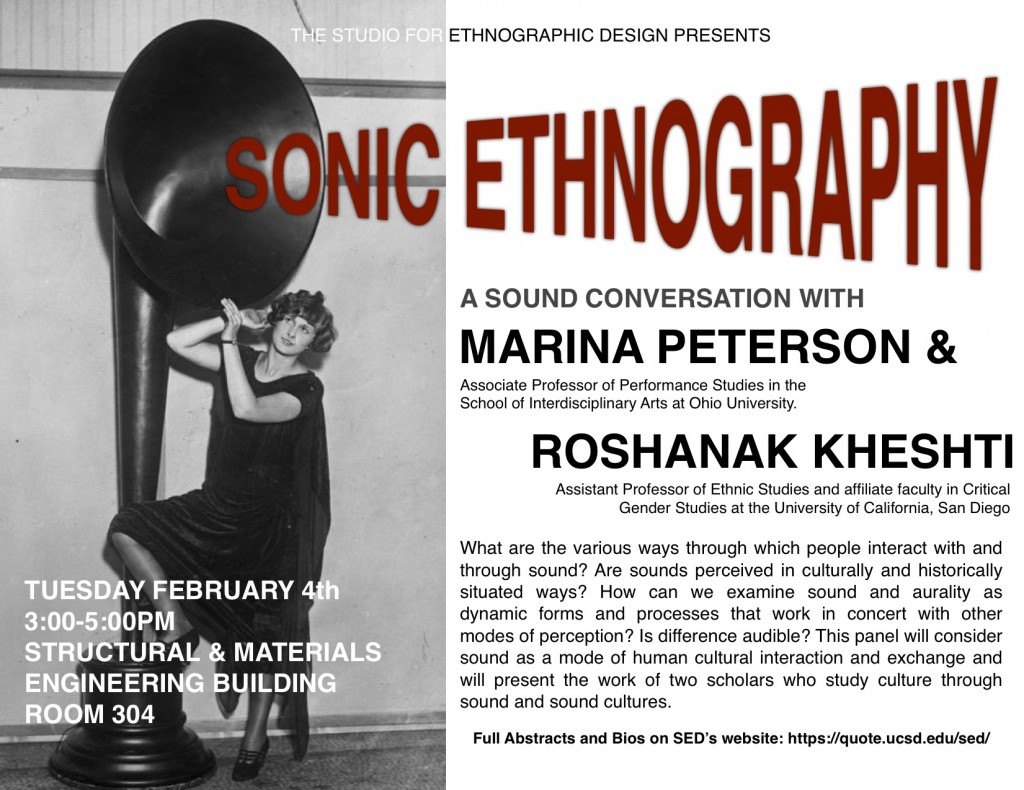 Ingold “Four objections to the concept of soundscape”

I draw on an audio recording of the Moonshine Festival parade in New Straitsville, Ohio to explore the use and limits of field recordings for a project of sonic ethnography. In asking “what do we hear?,” I move from a consideration of “What is the sound of…” toward a project of sonic ethnography that asks not only what do we hear, but how do we listen such that we might understand the ways in which others hear. Listening is a way of paying attention and being present, both by people in the world and in conducting research. Sonic ethnography begins with listening, and listening to how people listen. It requires paying attention to social and environmental sounds, ways in which people orient via the aural, how expertise is enacted through listening, and how attachments of kinship and friendship cohere around an attunement to sounds.

Marina Peterson is Associate Professor of Performance Studies in the School of Interdisciplinary Arts at Ohio University. An anthropologist, her work focuses on practices and processes of city making. Her research has explored multi-scalar dimensions of urban space through the study of sensory, sonic and embodied processes ranging from musical performance to planning and labor. She is the author of Sound, Space and the City: Civic Performance in Downtown Los Angeles (UPenn Press 2010) and co-editor of Global Downtowns (UPenn Press 2012). Her work has appeared in Anthropological Quarterly, O-Zone: A Journal of Object-Oriented Studies, Space and Culture, Journal of Popular Music Studies and Urban Anthropology. A cellist, she primarily plays experimental improvised music.

Author and anthropologist Zora Neale Hurston participated in numerous audio recording expeditions in the 1930s. Rather than record only local research subjects in Florida and Georgia, Hurston can be heard participating in the performances she set out to record, often recording only herself singing. What can we learn from what I have come to call Hurston’s phonographic refusal? Focusing on the question of fidelity–the faithfulness of recorded sound to source in ethnographic and ethnomusicological field recordings–I examine Hurston’s “sonic infidelity” or how her choices have effected what sounds are contained on record in the archive and how her interventions have disrupted the mythical production of an authentic African American folk.

Roshanak Kheshti is Assistant Professor of Ethnic Studies and affiliate faculty in Critical Gender Studies at the University of California, San Diego. Her forthcoming book Modernity’s Ear: The Race, Gender and Sexuality of Listening in the World Music Culture Industry focuses on the world music industry’s production of racialized and gendered sounds and a deracinated American world music listener. Her research broadly centers on the consumption of race, gender and sexuality through sound and film. She has published in the journals Feminist Studies, American Quarterly, Hypatia, Anthropology News, Parallax and Theater Survey. She has also published numerous musical recordings both as a former member of bay area-based experimental rock band The Ebb and Flow and independently as composer and performer for film.