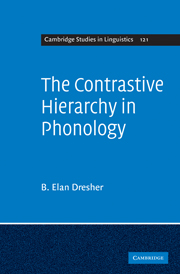 The Contrastive Hierarchy in Phonology

Cambridge Studies in Linguistics No. 121

‘Contrast’ — the opposition between distinctive sounds in a language — is one of the most central concepts in linguistics. This book presents an original account of the logic and history of contrast in phonology. It provides empirical evidence from diverse phonological domains that only contrastive features are computed by the phonological component of grammar. It argues that the contrastive specifications of phonemes are governed by language-particular feature hierarchies. This approach assigns a key role to abstract cognitive structures, challenging contemporary approaches that favour phonetic explanations of phonological phenomena. Tracing the evolution of the hypothesis that contrastive features play a special role in phonology, it shows how this insight has been obscured by misunderstandings of the role of the contrastive feature hierarchy. Questioning the widely held notion that contrast should be based on minimal pairs, Elan Dresher argues that the contrastive hierarchy is indispensable to illuminating accounts of phonological patterning.