Well, we’re all agreed that there’s an extra nasal in this token of the word circumnavigate; we’re just not sure what it is. Eric says it sounds labial to him; Bob says it’s more likely velar. And now I’ve joined Phonoloblog for the immediate purpose of asserting my opinion that the sound in question is actually an alveolar [n]—although I hope I will have other things to say here in the future, possibly even things that are more interesting and/or less contrarian.

Of course, if you’re copying an /m/ to a position immediately before a /g/, [n] is clearly the least likely thing (of the three possibilities floated so far) for it to show up as. So, if it is an [n], I’m assuming that it’s actually copied from the /n/ at the beginning of navigate rather than from the /m/ at the end of circum.

But why do I think it’s an [n] at all? Well, the first reason is purely impressionistic—that’s what it sounds like to me. But, being a native speaker of English, I’m not at all ready to place any faith in my ability to distinguish an [n] from an [ŋ] in that environment, and not terribly confident of my ability to distinguish either of them from [m] there, either. So I tried cutting off the gate part at the end, and the result sounded to me more like circumnavin than either circumnavim or circumnaving—but by now I had a hypothesis, and could not be confident that my ear was unbiased.

So, let’s look at the spectrograms. I agree with Bob that it does look very much as if F2 is going up during the vowel immediately before the nasal, which would seem to indicate that the latter is an [ŋ]. However, when I looked a little more closely, it seemed that F2 actually goes back down at the very end of the vowel. Here’s a spectrogram of just the navi[nas]gate portion of the word, with formants traced automatically using Praat:

This looks to me as if the rising F2 is the result of coming out of a [v] and moving toward a vowel target somewhere near [ɪ]; the fall at the end is more consistent with going into either an [m] or an [n] than with going into an [ŋ]. I also think that the mystery nasal itself looks more like the known [n] in the spectrogram thank like the known [m].

So, for the sake of comparison, I recorded myself saying [vɪm], [vɪn], and [vɪŋ], and made spectrograms of the results:

And here’s the [vɪnas] portion of the original: 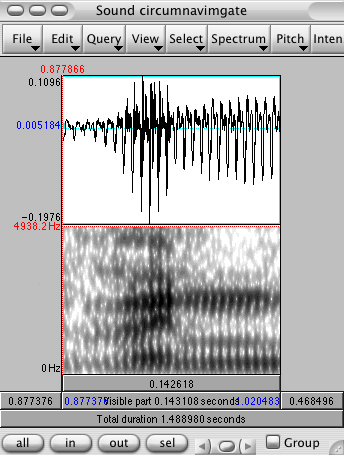 Of course, the original [vɪnas] is much shorter (a bit more than half as long as my recordings), because it’s an unstressed syllable in the middle of a long word spoken in some haste. But to the extent that comparison is possible, it looks more like the [vɪm] or the [vɪn] than it does like the [vɪŋ].

So, on balance, I think the mystery nasal is most likely to be an [n]. Besides, that’s what it sounds like to me.

One thought on “Circum locutions”