Read Logic Magazine’s excerpt of Redacted, a book on what government black boxes focused on the struggle to see surveillance technology in San Diego by me and investigative journalist Jesse Marx

And, finally, a paper HCI Tactics for a Politics from Below: Meeting the Challenges of Smart Cities, along with a video teaser from SIGCHI (Computer Human Interaction)

With Matilde Córdoba Azcárate (Comm) and Manuel Schvartzberg Carrió (Urban Studies and Planning), we are forming the Just Transitions Initiative (JTI) in the Design Lab. JTI supports innovation in design and organization towards more just and democratic futures, tackling geopolitics from below. We work towards just transitions by integrating analyses of labor, ecology, and social systems, including racial capitalism and settler colonialisms. We center and strengthen existing social movements. Our approach addresses transition as a social and ecological process, and design as a process that is political in its concern for transforming collective conditions of living. We consider global warming, infrastructure, housing, policing, food, and livelihoods as within our ambit. Transitions in these systems must build from existing situated knowledges and practices to address co-constitutive technical, social, and political dimensions. JTI experiments with new forms of inquiry and intervention, convening and supporting collective projects that can earn trust in a time when many are skeptical of ‘experts.’ Forging new paths for research, JTI operates within and beyond the fields of design, human-computer interaction, urbanism, and architecture. Finally, JTI recognizes that political agency is essential to any strategy of design intervention and seeks ways to repair disenfranchisement.

I got to talk to Lee Vinsel about the ideology of innovation and entrepreneurship, how they become promising policy, and who and what is devalued and undermined in the process. This is an episode of his podcast People and Things, the in company of people like Ruth Schwartz Cowan, Meredith Whittaker, and Meredith Broussard.

Oxford Internet Institute hosted me for a talk on my book Chasing Innovation: Making Entrepreneurial Citizens in Modern India. Because there would be a widely interdisciplinary audience, I took the chance to draw out some points threaded through my book about entrepreneurial ideology’s relationship to extraction, seen through prisms of gender, caste, and class. The talk argues that entrepreneurial citizenship asks citizens to fill the gaps of a shrinking and liberalizing state. It goes on to show how  this model usually relies on entrepreneurs’ ability to marshal resources from others — gendered household labour, landholdings, or class and caste networks, for example. As a result, it can reproduce structures of privilege in new forms.

I’m grateful to Karrie Karrahalios, Anita Chan, and Indy Gupta of UIUC’s Center for Just Infrastructures for inviting and challenging me to put an argument together about how HCI and computing needs to take political agency and community power building seriously when we talk about tech ethics, design, or tech and justice. The talk is available online now. 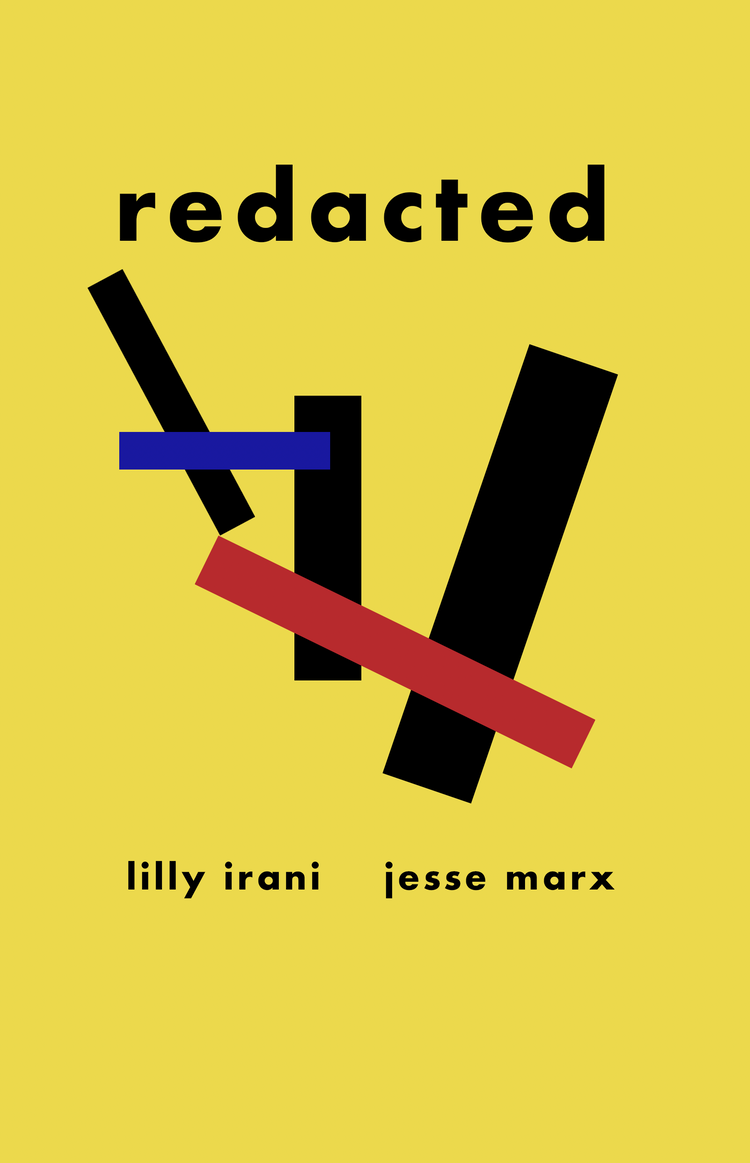 I’ve got a new book Redacted, co-authored with investigative journalist Jesse Marx. It is published by Taller California, a press dedicated works that engage with the border as a sociopolitical place and as a liminal and creative space.

The book offers practical advice and critical and sardonic readings of redacted government documents while reflecting on who gets to see who in processes of surveillance and making things public.

Buy the book from Taller California

Secrecy and surveillance are two sides of the same coin. Both stem from an attitude that the people atop our institutions know better than the rest of us how to govern and structure society. Both engender mistrust and inhibit collective action. They engender mistrust by encouraging us to outsource responsibility for safety. This inhibits collective action, not only by chilling our speech and association but ceding authority to institutions we mostly do not participate in.

The “right to know” movement is fairly new in the United States. It emerged in the 1960s out of a political culture that saw opposing parties in Congress and in the presidency — the former wanted oversight over the latter. A more adversarial school of journalism as well as public advocacy groups joined in, pressing Congress to pass the Freedom of Information Act that ushered in “transparency” as a political buzzword. A politics of suspicion might have encouraged these transparency laws. Scholars debate the effects of transparency laws in the decades that followed. Some argue that transparency can exacerbate fear and fantasy, with revealed documents encouraging yet more speculation about the new horizon of the unknown. Others argue that transparency encourages citizens to stir up fervor but not take responsibility for a shared world.

We see it differently.

Transparency is not an end in itself, but a tactic for accountability. Accountability happens when the public can impose consequences on public actors, transforming institutions in turn. We are surrounded by groups seeking to claw back surveillance, police brutality, workplace harms, and more. Transparency in this sense is not about individual citizens exercising their liberal rights to know and vote. It’s about creating facts to build movements and even propose alternative policies and practices. It is not a tool of fear, uncertainty, and doubt, but a tool collectively wielded to gain attention, build power, and demand that gain alternatives are given gain a fair hearing.

Security is often conflated with secrecy, cutting communities and democratic processes out of technology design and oversight. This note outlines the academic research that shows why secrecy leads to less secure technologies and disparate impacts. Co-authored with Julia Slupska of Oxford Internet Institute, Jeanette Lowrie of Tech Workers Coalition, and Professor Deian Stefan of UCSD’s Crypto and Security Group.

Cedric Whitney and I published a report last week, “Broken Promises of Civic Innovation: Technological, Organizational, Fiscal, and Equity Challenges of GE Current CityIQ” as part of the work we do at the Institute for Practical Ethics.

The claimed public benefits of the Intelligent Cities project, billed as the ‘the World’s Largest Smart City Platform’ by the city, were promoted as creating data for sustainability, promoting civic innovation, and saving energy on lighting. The City states that this project ‘is a tremendous technological benefit to the city and our citizens’[1], and that ‘from easier parking and decreased traffic congestion, enhanced public safety and environmental monitoring, enhanced bicycle route planning, to enhanced urban and real estate development planning, this platform can improve the quality of life in our city and boost economic growth’.

The city has already spent three years and millions of dollars on this platform implementation. Yet these aspirations for civic empowerment and sustainability data have not been realized. This project has been limited by technical breakdowns, organizational limitations, and an opportunity structure that adversely affects lower-income San Diegans.

Instead, the city is left with a surveillance system that pervasively records video in public thoroughfares and near homes, workplaces, and places of worship – and the city, not citizens, access and use the data. Ongoing data recording incurs costs of data storage, data transmission, and the electricity required to maintain operations of the networked computer system.

This report summarizes the results of investigation of the system at the Institute of Practical Ethics and Design Lab at UC San Diego into the implications of CityIQ smart streetlights for privacy and inequality.

San Diego is the first city to deploy the CityIQ smart city platform. The problems in implementation, including technical flaws in the CityIQ platform, can be attributed to problems that arise in the development and stabilization of any new complex technological system. However, policy makers and tax payers should evaluate whether the costs of unstable, early stage systems should be borne by the company that markets and profit from the system. High-tech companies often market their internet platforms as “permanently beta” and subject to adaptation, but costs and risks of system failure are currently borne by the City of San Diego.

[3] The City has stated that CityIQ audio recording is available but not been enabled.

From the award committee citation:

“Chasing Innovation is a fearlessly ambitious work of scholarship that weaves together history, ethnography, and critique of a seductive vision of entrepreneurial citizenship. Through its pages, Lilly Irani illustrates how discourses of innovation were articulated with the distinctive context of a liberalized India hungry to climb global chains of value. Marked, at times, by a raw and searching reflexivity as its author reflects on the failures of imagination produced by her own socialization as a tech worker, the book pushes back against the “subsumption of hope” by innovation and points to mass politics—for all its inefficiencies—as the true locus of democratic futures.

Irani is a careful ethnographer who gets inside the optimistic dreams of entrepreneurs, whose impetus to “move fast and break things” in their speculative world-making betrays a certain innocence about the violence of the market economy. Her work brings us into a high-end design studio where the free will of innovators relies on unfree labors of devalued service staff and on the extraction of solutions from subaltern subjects who are framed as improvisers rather than as innovators. The key actors in Chasing Innovation “attempt to stabilize, manage, and profit from uncertainties and futurities” even as they themselves are constrained by the design thinking through which innovation for the developing world is increasingly channeled.”

CS Soong, host of Against the Grain, hosted me for a one-hour conversation on innovation, democracy, autocracy, and development. The show is called “Innovation and its Discontents” and it broadcast Aug 20. You can listen here or through your favorite podcast app.