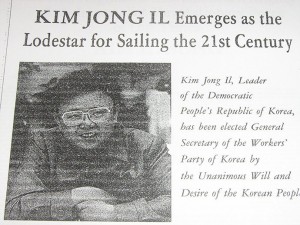 “Over 3 Decades, North Korea Paid Hundreds Of Thousands Of Dollars For Full-Page Propaganda Ads In Western Newspapers.” by Jeremy Bender

For instance, Kim designated himself as the leader of the democratic people’s republic of Korea on The New York Times. This propagandized ad was definitely a waste money because most people did not believe it. This is the worst propaganda I have ever seen. Then, why did Kim pay hundreds of thousands of dollars for the ads?Jeremy argues that the ads were propaganda not for western readers but for people in North Korea. As North Korean media reported on the ads, the government could claim the articles written by westerners who praise North Korea.

Cunningham mentions, “people were generally irrational and highly impressionable in their response to messages, ideas, and event” in a section of ‘New Propaganda as Public Relations.’ It means that nature of people undoubtedly accept propagandized information from media. So, Kim use the nature in order to control people. Kim prevents all culture and civilization from other country and isolate people from the external influence. If people have a chance to absorb Western culture or compare their culture with other culture, Kim could not keep the dictatorship.