As I was reading opinion section of CNN, there was an interesting title. “Is free speech at risk at our universities?” It was posted yesterday which was September 4th. As a university student, it caught my attention and I read the opinion about the free speech at university. Kathleen McCartney is the president of Smith College in Northampton Massachusetts discussed a controversial issue, which is free speech. She discussed how a lot of people think freedom of speech is at risk, in danger at colleges and universities in United States.

She talks about how students need to foster constructive conversations in different topics including free speech. She mentions how College students arrive at college largely unprepared for debate. As she mentions, there might be students who are not prepared for debate when they are entering college, but I personally think that there are a lot of college students who are well prepared to debate on certain topics such as free speech. She is generalizing how most of the students entering college are not prepared to debate, which is wrong. 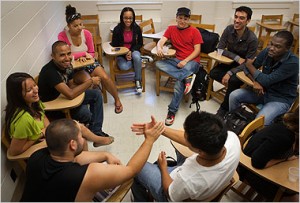 She also discusses how students must learn to discuss provocative ideas with open minds, and consideration. Her first proposal is to make space and time for our communities to discuss provocative ideas, including ideas offensive to other people. Her second proposal is that the colleges have to create forums where people can share voices across the political spectrum.

Basically her opinion overall is encouraging college students to discuss provocative ideas, have open minds about those ideas. She is saying that we need to hear all the opinions. But I personally disagree with her opinion. As she mentions, college students are experiencing time where they form different identities such as political, ethical, and intellectual. I think the college need to inform student about free speech in the United State along the First Amendment, which abridges freedom of speech. Before suggesting student to express and discuss provocative ideas with others, they have to let students know the fundamental rights of freedom. They have to think about the reasons why free speech is at risk at our universities. As she mentions it is because many people believes free speech is in jeopardy at our colleges. Rather than encouraging students to discuss their ideas, they first have to allow student to understand the freedom of speech.