Hate speech is a type of speech that incites violence or prejudicial actions based on race, sexuality, religions, and gender. I often see posts that contain some types of hate speech on my Facebook, and these posts sometimes make me feel unpleasant. Even though these posts do not point me or a group that I am a part of as a target specifically, these still make me be offended. In fact, these exposures to hate speech on Facebook influence to users’ mental health. According to an article by THINKPROGRESS, Zack Ford says a new study from Italy found that exposure to hate speech and other offensive contents on social networking sites including Facebook undermine people’s mental well-being, as well as their levels of social trust. 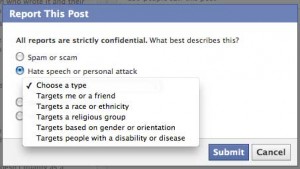 I think that discriminating and insulting others is not acceptable in our society, but at the same time, I think that freedom of expression and speech should be allowed on the Internet. How do you feel about hate speech on Facebook?