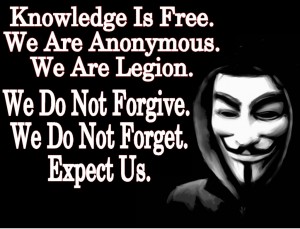 Anonymous for those of you who haven’t heard was an internet hacktivist group that began in 2003 and have been responsible for attacks on major websites such as causing them to shut down momentarily. “Anons” as they call themselves recently grabbed the attention of many Americans on August 14th as they attempted to release the name of the police officer who was involved in the Michael Brown shooting of August 9th. While their efforts resulted in the misidentification of the actual police officer involved, their influence cannot be underestimated. The internet has become a representation of the political stage unfolding before us, commenting and changing the way that we interact and perceive real world events.

Their hacktivist methods involve an attack known as a Distributed Denial of Service (DDoS). A DDoS attack is an attempt to make an online service unavailable by overwhelming it with traffic from multiple sources. People can use their own computer to send server requests to a website themselves or use a botnet to hack other computers to do this action for them.  While people attempt to separate the two, both are considered to be DDoS and are illegal because they result in the same effect. DDoS have been the topic of much discussion due to major attacks in 2012 of major banking institutions. Early this year the Federal Financial Institutions Examination Council issued a notice forcing banks to protect themselves against this type of occurrence. The scope of DDoS has resulted in a nationwide response and existing tech firms now, also, provide protection against DDoS attacks. Watch this video which explains DDoS and their effect on companies.

This new method of online disruption used as a form of protest begs the question about the legality of this act. Hacktivists see this as a way  to protest injustice and feel it should be protected as freedom of speech. Companies see this as threatening as it is meant to disrupt “business as usual”. Many hacktivist have already been jailed due to some of these cyber attacks. In a video they released Anonymous makes the case for the legality of this type virtual protest.  In 2011, Anonymous caused the US Department of Justice to crash in protest against bills that would limit internet freedom; SOPA and PIPA.

Others in arguing for the legitimacy see a clear distinction within DDoS based on its cause not its effect. In his lecture at on Sept. 3, 2014, UCSD Communication PhD candidate, John Armenta calls for a distinction between DDoS and “virtual sit-ins”. While a DDoS uses a botnet to hack other computers to perform the action, a “virtual sit-in, requires individuals to use their own computer to calculate an attack. UCSD Professor Ricardo Dominguez faced criminal charges  in 2010 for conducting this type of virtual sit in to protest budget cuts to education. Should the act of clicking a webpage continuously be a criminal act? Whether you believe so or not it currently is. How about if you were to use an app to continuously click a website for you? Floodnet is a software tool that does just that. In Jill Lanes’ piece she talks about how the indigenous people of Mexico have used this virtual technology to make their presence known online and protest the physical crimes that are committed against them.

Does DDoS Go too Far?

While the legitimacy of online protest is a new concept people have also used DDoS in other ways that question the legality of the use of this tactic altogether. A hacker group who call themselves “DerbTrolling” shut down major websites based on phone-in requests from online audiences. One request was to shut down “League of Legends” website that an online youtube personality “PhantonLord” was using. This resulted in real time negotiation with the hackers and ended with the identity of the online personality compromised. At one point pizza deliveries were sent non-stop to his address. Later, he was jailed and accused of being part of the hacker group himself. In this incident DDoS was used to shutdown a website for amusement and resulted in serious personal injury.

The question of the use of DDoS and freedom of speech on the internet is a question that will be continued to be discussed. As the realm of the internet becomes more prominent, people will learn new ways of dissenting and voicing their opinions in ways they feel they are heard. The extent and methods through which we are able to express ourselves online are still changing and so too will new laws and regulations. For the meantime, the internet will continue to stage the digital attacks which are representatives of real world consequences. 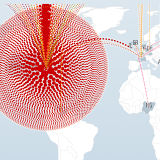