I stumbled upon this article on Think Progress regarding a recent event of Columbia University student carrying around a mattress for her senior visual art thesis. Emma Sulowicz uses her dorm mattress to represent the sexual assault she has endured.

Senior Emma Sulkowicz will carry around a mattress everywhere she goes as long as her rapist is enrolled at the same Ivy League school as she is. The public project reflects the fact that Sulkowicz was raped in her dorm bed at the beginning of her junior year.

In a Columbia Spectator video, Sulkowicz explains that her project is a “endurance performance arts piece” because it is a weight that she carries everywhere because rape can happen anywhere. She also states that “The piece could potentially take a day, or it could go on until I graduate”.

Her senior thesis, Carry That Weight or Mattress Performance, embarks on her mattress being a powerful symbol of her experience with sexual assault. Under the terms of her performance art project, she’s not allowed to ask for help carrying the bulky object, but she is allowed to accept help from others if they take the initiative to offer.

Last spring, along with a group of students, Sulkowicz filed a federal Title IX complaint accusing Columbia administration of mishandling rape cases. Columbia University has dealt with protest against sexual assault with cases of student using red tape to symbolize administration’s lack of action on issues about rape and violence in 1999.

Jon Kessler, a visual arts professor at Columbia, helped Sulkowicz develop the concept and told the Columbia Spectator that her piece could ultimately impact campus culture “As a physical metaphor, the piece has tremendous power”. 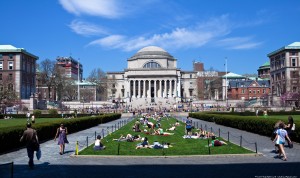 I believe Sulkowicz reimagines political participation for sexual assault. She is creating a statement at her campus to promote the awareness of the weight victims of sexual assault have to carry on campus. She promotes the fact that rape can happen anywhere even on a college campus and how students of a college campus should stand up for such injustice.

Sulkowicz reimagines embodiment of the sexual assault issue by using mattress as a object for revolutionary cause than its ordinary use in everyday life. Her usage of the mattress shows revolutionary potential in everyday things. Using everyday objects to show some sort of disturbance proves impact as her public project is catching the attention of many platforms of news media. Sulkowicz is taking control of a space on her campus to embark on participation in political and social protest towards the Columbia administration as well as various college administration to show that sexual assault is something to take seriously.