Cable news are thought to provide all sides of the story in an objective view when reporting news events, however, news report on the shooting incident in Ferguson started a controversy on whether the news cover every aspect of what happened. The article is saying that from the news, we see images of policemen releasing tear gas, people getting arrested, protestors holding signs with racial tension related slogans, but what the news don’t show us is the things that are also happening in Ferguson. The corrupting and violent aspect of the a white policeman shooting an African American teenager to death not only does not provide us with all the information we need to know, but also build up a negative perspective in people’s minds.

“But that’s not what most people saw. This is why the media need to expand their understanding of their role in times of crisis. The media’s job is to report not just all that’s dreadful, corrupt, dysfunctional and violent in our world but what’s working, and the powerful and humane ways people in communities respond to that violence and corruption and dysfunction. We often hear the bromide about how it’s not the media’s job to report on the houses that didn’t burn down or the planes that didn’t crash. And I’m not saying they should. A house not burning down or a plane not crashing is normal and unremarkable. But the response we’ve seen in Ferguson, and during other crises, is remarkable. We’ve seen some extremes of bad behavior in Ferguson, but we’ve also seen some extremes of good behavior — though in the media we mostly see only the former.” (Ferguson: The Untold Story) This whole paragraph is the main argument of this article, arguing that it is the media’s job to be responsible for not being narrow-minded when reporting news, that the media should acknowledge the fact that they are the objective story tellers who are obligated to tell us “the untold story.”

Another evidence of how the media only report the violent and chaotic side of the shooting incident is that when I googled images of “Ferguson Michael Brown,” all the images that popped up were either protestors being arrested by policemen or Michael Brown’s family mourning over Michael’s death. The image of the lady  passing out milk to people that were attacked by tear gas was nowhere to be found on the google search result. 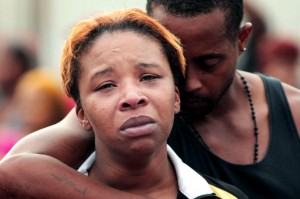 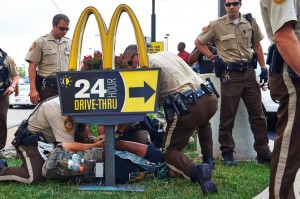 This shows how the media do not present everything that’s happened in news events therefore leading the audience having access to the limited resources and understanding of only parts of the story.

Furthermore, if the media choose to put focus on only matters that they believe are worthwhile to air, the dysfunctional behaviors and brutal images that the media present will often create a copycat crime phenomenon. Just a few months ago in Taiwan, a 21 year old man, Chieh Chen, randomly stabbed the passengers on the MRT train,  four people were killed and twenty-two people were injured. The suspect claimed that he had been planning this massacre since he was little. The shocking news not only alerted people in Taiwan to remain cautious on the MRT, but also started a crime copycat phenomenon on Facebook. Several teenagers started to post on the internet saying that the stabbing incident was heroic and that they would someday fulfill their lifelong dream, like what Chen did, to murder innocent people. Two weeks after the incident, the media were still showing the images of dead bodies on the MRT and the replay of the clips from the passengers that witnessed the tragedy. From this we can see that the effect of the news report can place a huge influence on people’s behaviors. The nonstop report of the cruelty of Chen only showed us the corrupting values in society. What the media in Taiwan should have done was to educate people that violence should not be encouraged in order to prevent possible tragedies.