Robin Williams, he was an American actor and comedian. I first knew this great actor and comedian through a great movie Dead Poet Society (1989). I became a fan of Robin Williams as I watched the movie, Patch Adams (1998) which really impressed me. He was a nice person who touched heart through his acting. He was loved by not only many people in the U.S. but also enormous people in the world. 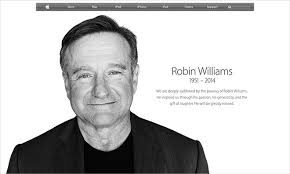 I was shocked when I first knew that he died. I received the news about his death through Facebook not through newspaper or television news. I saw one of my friend’s post on Facebook which about honoring his death. Many people expressed their sorrow about Williams’ death through media. Apple issued tribute for Williams on their website, and also Tim Cook, the CEO of Apple Inc., expressed his sadness through his Twitter. Michael J. Fox and San Francisco Giants also expressed their feeling of shock and sadness about Robin Williams’ tragic passing on their Twitter accounts. Furthermore, G-dragon, a Korean rapper and singer, sent his condolence on his Twitter. 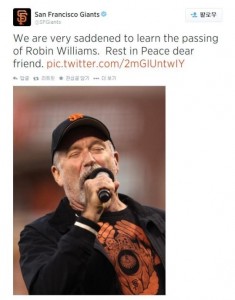 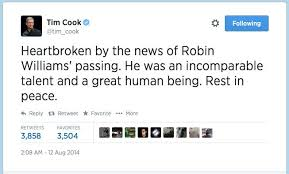 Not only in people in the United States but also many people in many different countries expressed their sorrow via social media by posting on Facebook and Twitter. Even some people made an image or a video to honor his death. People from every corner of the globe shared sorrow even though they could not attend Williams’ funeral. We can express lots of feelings through media, and I think expressing regret through media is one of the good ways of use of media in terms of global media culture.