Globalization is very controversial issue that people are arguing for a long time. There are people whose income was increased, where other group’s income merely changed, and even growing negatively. Who are the winners and losers resulted from globalization? 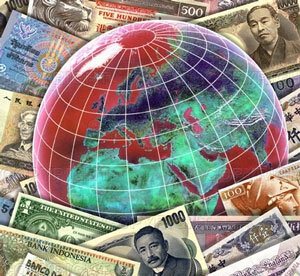 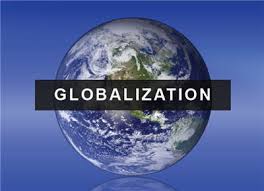 Globalization might have succeeded in improving the wealth of rich and Asians but not for the people in middle classes in the West. According to the article the middles class in the West have seen very little or no improvement on wealth. The low and middle-income people from rich countries such as the United States, Germany, and Japan did not gain much of income and especially Japan showed negative growth. These people are considered as low class people in their countries. Then who is the winner of globalization? 9 out of 10 of the winners of globalization are from resurgent Asia. A lot of people are from rural China, Indonesia, India, Vietnam, Thailand, and Philippines. In their countries, they belong to the middle or upper class people in terms of income distribution. 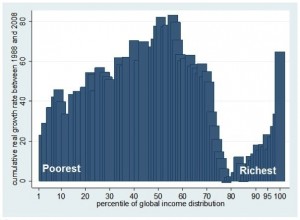 The graph shows the how globalization affected the economic trajectories. The vertical axis shows the cumulative real growth rate between 1988 and 2008 in percent, and the horizontal axis shows the percentile of global income distribution. As the workers in the advanced economies such as the workers from the United States have discontent about the situation, they can express their discontents and promote for solutions. It is possible to stop the winners, the rich and Asians from gaining their income if they derail globalization through different policies such as anti-immigrant policies, capital control and protectionism. But the losers of globalization, the middle class from the West have little voice and power because the rich people came to control the process of politics. If globalization is derailed, they can remove the immediate pressure of cheaper labors from Asia, but in a long-term, it is basically the Western middle class people creating conflict with poor people worldwide.

Is there a way to reduce the global inequality?