Last Month, Theresa Roemer gave “Good Morning America” a tour of her three-story closet which is the most luxurious closet in America.

After the interview, Theresa Roemer personally updated this video on Youtube and also shared related news on her Twitter and Facebook. She claimed that this is a philanthropic closet and built for fundraisers. The video soon attracted numerous people’s eyes. Especially for women, who seek to the materialistic life, dream to have such a closet even just one-story. However, Theresa’s high-profile move, opening personal valuables on mass media, attracted the thieves’s attention as well. Two weeks after the the news were aired, a thief broke in Theresa’s house and robbed the most expensive items which are valued almost 1 million. 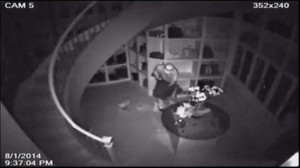 On August 12, the Houston Press was contacted by a person who claimed that he was the one recorded by the surveillance footage. He sent a package including 10-15 items from the collection of the closet and advocated that those luxuries are fake. He also contacted with Theresa and requested for half million to keep silence and return the items. Otherwise, he will expose the news to the media.

The investigation is continuing and in response, Theresa said that her closet contains both expensive and inexpensive goods. She explained that it is common to “Mix and Match”. She defended for herself that the items for charity are not fake but not all of the items in closet are valuable.

In this case, I realized that mass media are scary. The media do not only function as a tool to convey the message, but also could become a weapon to threaten people. The suspected thief recognized the power of media and abused the power as a way for exchange. For another aspect, Theresa did not realize the con side of the media and the potential danger of releasing her personal valuables on public. Thus, I think that media are scary and also take a part of responsibility for this burglary.