The recent events in Ferguson, Missouri have raised many issues concerning media and particularly in regard to professionalism amidst the tense racial climate. Among the multitude of social media movements that the ongoing situation has produced is a particular campaign that directly questions the motives of media outlets and their reporting. Matt Jones of GQ.COM (UK) explains how the #IfTheyGunnedMeDown campaign was started by criminal defense lawyer CJ Lawrence and became very successful. I started seeing pictures on my personal twitter feed with the hashtag #IfTheyGunnedMeDown. 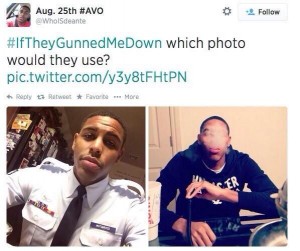 Twitter user @WhoISdeante exemplifies the issues raised by the campaign.

Media outlets have the power to choose what to broadcast and in what way to do so. Given the massive audience that national news reaches today, the way the news is reported has a direct relation to the public’s reaction to that news. Stereotypes can be a way for people rationalize the world they live in and the news media can help perpetuate those stereotypes in a society. The stereotypical image of a criminal is conveyed through the medium of news which both reinforces and continues that stereotype. Questions over journalistic professionalism come into play when one considers the role of media in creating stereotypes. In today’s age of the smartphone, people are taking pictures constantly without a second thought. A single picture provides a window into an individual’s life, but not everyone wants to live in a glass house. For a public sphere, as Jurgen Habermas defines it, to take shape, members of the media should have a journalistic obligation to use pictures that do not unfairly undermine the individuals in the picture. The #IfTheyGunnedMeDown campaign showed the potential for a news agency to influence their audience by simply sharing a picture.