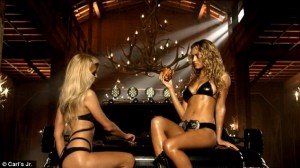 Carl’s Jr. is one of the known companies for sexiest advertisements, which they started nine years ago. In 2005, Paris Hilton starred in a Superbowl advertisement for Carl’s Jr, where she washes a car in bikini, and eats Carl’s Jr. burger. At that time, the commercial became very controversial because it was considered as one of the sexiest ad campaigns. A lot of people were complaining how Carl’s Jr objectified women to sell their burgers. 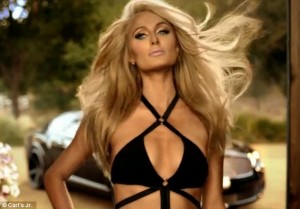 Recently, Carl’s Jr. released a new commercial called Texas BBQ thickburger. The swimsuit model Hannah Ferguson in a bikini washes the truck, rubbing soap on herself, and eats burger. Then Paris Hilton in bikini with Bentley appears and saying, “You missed a spot” before she bites a remnants of Hannah’s burger.

Through the sexual commercial, Carl’s Jr. is trying to attract customers’ attention, which is less individualized. The Carl’s Jr. commercial is pretty much indirect in a way that customers do not quickly respond by buying it, rather it is basically a general reminder or reinforce. (Schudson) People might be confused what they are trying to sell by watching the commercial. Are they trying to sell luxury car, or a burger? Whether it is controversial or not, by objectifying women as sexual object to sell their product, the commercial surely catches the attentions of the viewers and audience, which means sexiest advertisement is very effective marketing for the ad agencies.