I read an article about Palestine uses of propaganda that is written by Michael Curtis when I took a propaganda class last quarter. Throughout the article, the author writes that how Palestine propagates and appeals to people in the world. Around 300 children and adolescents are killed since Israel assaulted Gaza against Hamas according to the United Nations, and Palestine creates their propaganda by inserting some images of those children. Palestine provokes pity and sympathy by using some photographs of wounded children through their propaganda. The children in the picture are bleeding and showing fear on their faces. Palestine can make themselves as oppressed victim against Israel by showing some image of those children. 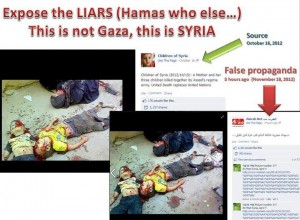 The power of an image is incredible. It says lots of things, and even it can be a story. Palestine put a story by using a feeble voice of frail children in their propaganda. These stories evoke sympathy and anger among the people in the world. However, the story of Palestine sometimes exaggerate or distort the fact. The image above shows that injured children of Syria in a picture are considered as Palestine children who are attacked by Israel through Palestine’s propaganda. If a person see only the false propaganda of Palestine, the person might think that the children in the picture are innocent victim who are killed by cruel and inhumane Israel without knowing the truth.

People receive enormous information through media, and they do not know whether the information that they got is true or not. People are easily affected by what they see. Not only Palestine’s propaganda but also many other propaganda exaggerate and distort facts by using images. We discussed about various media scares these days in the class. Can a photograph be one of the media scares these days even if the photograph captures the real moment in the world?