According to the statistic from Emojitracker website, people use approximately 300 emoji tweets a second. As the smartphones and social networks developed, people are replacing their words with emojis, which emojis became a sub-language. People express their emotions, and feelings through emoji nowadays. Shigetaka Kurita first created Emoticons in Japan in 1990’s. He created about 176 characters of emoticons and made them to be used for SMS text messages. In 2008, the uniform emoji alphabet was created, and Apple adopted it in their iOS5 operating system in 2011.

This link gives you 10 quiz questions, which you will be translating the emojis into the sentence. This is to see how fluent you are in emojis. 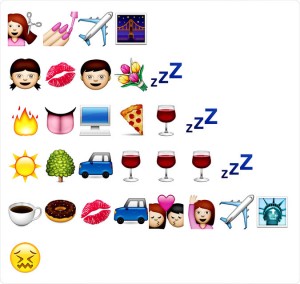 Unlike abbreviations, emojis can be used and easily understood by everyone. Since the emojis are emotional icons, everyone easily understands it. That is why the emojis are being used a lot by people. Variety of people from teenagers to elders uses emojis to express their emotions. It can also be used in different situations such as when you don’t really know what to say and if you don’t want people to think that you are rude, you can response with emojis. It can be a good response. People talks about how the emojis available today are very limited to express their emotions and feelings. People thinks that it is not enough to effectively deliver their emotions with those limited emojis.

It is very controversial that some people say that emojis make people dumb, makes people misunderstand, negatively effecting communication between people, where other people say that emoji helps enriching our communications. It might be true that people might misunderstand the emojis, but it is a sub-language used online, or through text. People do not use emojis when they are writing or speaking. It is not a full-fledged language, it is just added to deliver the emotions because they are not communicating face-to-face. Emojis will not be a used as full-fledged language because it is not diverse enough to substitute the language. However emojis are used as an alternative way to express emotion. By using the emojis people are sending the facial icons and other little pictures even though they are not communicating face-to-face.

Article: “The Emoji Have Won the Battle of Words”

Are You Fluent in Emoji?

One thought on “Does Emojis affect our communication?”