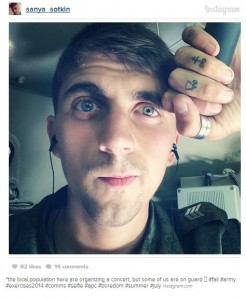 Sometimes uploading selfies online will leak confidential information about the user.  Recently,  a Russian solider named Alexander Sotkin casually posted a selfie on his Instagram, which exposed his location. Ironically, Sotkin was claimed to be a communication specialist by the press and seems to be unaware of Instagram’s feature that points out where each photo was taken. Unfortunately, his pictures accidentally hinted to the whole world that Russian soldiers may be close to Ukraine’s border. Although Russia and Ukraine are not currently engaging in war with each other, it is clear that Russian troops were positioned near Ukraine as a result of previous political interactions between these two countries. 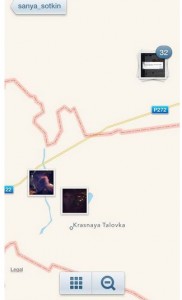 The locations where Sotkin supposely took his selfies

In recent years, Ukraine has been dealing with financial crisis and political instability, which attracted Russian intervention. However, on February 18, 2014, the Ukrainian Revolution began with the Ukrainians violently protesting against their government, to dismiss the Ukrainian President, Viktor Yanukovych and to restore the Constitution of Ukraine. They viewed Yanukovych as an inefficient leader because he neither fulfilled his campaign proposals nor responded to their needs. As the mob continued to resist the police, Yanukovych begged Russian president, Vladimir Putin, to send Russian troops to end the civil disobedience. At the end of this revolution, Ukraine is still unstable and the Russian army remained close by that country.

Although Sotkin’s selfies were initially considered a controversy that revealed the locations of Russian troops, a recent article supported the validity of these pictures. A closer look at his hashtags, repeat the phrase, “#exercises2014,” which implies that he may still be training as a soldier. Yesterday, a CNN news online article announced that the number of Russian troops increased and they are participating in drills around Ukraine. On the same webpage, a video assumes that Putin intends to encourage Russia to further invade Ukraine because he inhibits Ukraine from connecting with the European Union and NATO. For instance, after the Ukrainian Revolution, Russia annexed the Crimean Peninsula, which was once ruled by Ukraine. (see below link titled “2014 Crimean Crisis”). Due to yesterday’s article, Sotkin’s selfies became more validated as evidence that Russians became further physically involved with Ukraine.

Despite the press questioning if these selfies displayed the accurate locations of Russian soldiers, the audience members are enabled to interpret the issue in their own way. This is an example of decision studies, which not only emphasizes responsive speculators, but also advocates individualism (Lievrouw, 307). Personally, I thought Sotkin was trying to keep his friends and family back home updated. He just forgot to turn of the location feature.

In regards to this blog’s title, selfies can sometimes be reliable sources, but people often use Photoshop these days.

2 thoughts on “Can Selfies be a Reliable Source of Evidence? (blog)”