ISHI: The Archive Performance (by James Luna) at UCSD 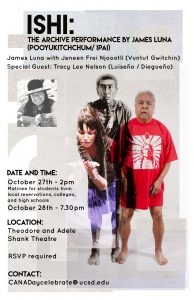 Ishi: The Archive Performance is a new work written and performed by renowned Native American visual and performance artist James Luna. In 1911, an Indian man walked into a small northern California town. His appearance inspired fright, laughter, and pity from the populace. Anthropologists came to the conclusion that Ishi was the last of his tribe and decided that for his welfare and for the advancement of science, he would love out his remaining years as a living specimen at the University of California, Berkeley’s campus museum. Based on archival work, James Luna has created a powerful exploration of Ishi’s life, silence, and the the place that he should hold in the history and cultures of California. By James Luna (Pooyukitchchum/Ipai) with Jeneen Frei Njootli (Vuntut Gwitchin) and special guest Tracy Lee Nelson (Luiseno/Diegueno) at UCSD.

ETHNOGRAPHY & DESIGN: MUTUAL PROVOCATIONS is delighted to list this event, payed for by the California Native American Day committee, and other sources of funding, as part of our conference programming. Because seating is limited, we urge conference goers who plan to attend the performance to RSVP.

Kindly RSVP at CANADaycelebrate@ucsd.edu to reserve your free ticket.