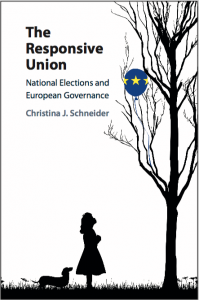 The EU faces a serious crisis of democratic legitimacy. Citizens believe that the EU is run by distant and non-responsive political elites. The EU’s perceived lack of responsiveness to ordinary citizens poses a threat to its very survival. This timely book presents a comprehensive account of how EU governments signal responsiveness to the interests of their citizens over European policies. I develop and test a theoretical framework of the intergovernmental dimension of responsive governance in the European Union, using evidence amassed over nearly ten years of multi-method research. The findings show that European cooperation in the Council of the European Union takes place in the shadow of national elections. Governments signal responsiveness to their publics by taking positions that are in the interests of politically relevant voters at the national level, defending these positions throughout negotiations in the Council, and seeking appropriate policy outcomes at the EU level

Read the Introduction and Conclusion

Read the Monkey Cage blogpost in the Washington Post

Read the blogpost at the Deutsche Vereinigung fuer Politikwissenschaft

Read reviews of the book:

“Christina J. Schneider’s book challenges two widely held ideas about how the EU works. Against the standard ‘democratic deficit’ claim, the book shows how governments are increasingly responsive to their citizens when acting at the European level. And, against the Liberal Intergovermentalist theory of EU politics, the book challenges the assumption that European level issues are not salient enough to warrant significant domestic contestation. As such, the book is a major contribution to how the EU should be understand going forward.”

“Christina J. Schneider bridges the explanatory gap between national elections and EU governance in a theoretically convincing and methodologically sophisticated way. Responsive Union is a milestone in the study of European politics.” 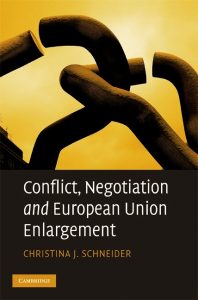 Each wave of expansion of the European Union has led to political tensions and conflict. Existing members fear their membership privileges will diminish and candidates are loath to concede the expected benefits of membership. Despite these conflicts, enlargement has always succeeded – so why does the EU continue to admit new states even though current members might lose from their accession? Combining political economy logic with statistical and case study analyses, I argue that EU enlargement happens despite distributional conflicts if the overall gains of enlargement are redistributed from the relative winners among existing members and applicants to the relative losers. If the overall gains from enlargement are sufficiently great, a redistribution of these gains will compensate losers, making enlargement attractive for all states.

Read the Introduction and Conclusion

Read reviews of the book:

“Christina Schneider’s study of the process and outcomes of EU accession is a model of modern political economy research. By combining quantitative and qualitative
methods with a rigorous theoretical approach grounded in the analysis of distributional conflict, she provides a thoroughly convincing account of the sources and dimensions of differentiated integration.”
Lisa L. Martin, Harvard University

“Christina Schneider has written a remarkably wide-ranging and analytically deep and compelling analysis of EU enlargement. Carefully dissecting the many and complex distributional battles involved in successive enlargement rounds and pondering their implications, her work stands out as one of the best studies on a central aspect of European integration – methodologically sophisticated, thorough, and original.”
Walter Mattli, Oxford University

“Rational choice approaches cannot explain the dynamics of EU integration and especially EU enlargement – so they say. Christina Schneider’s book consigns this statement to the realms of fantasy. She forcefully demonstrates that the contrary is true: EU enlargement leads to distributional conflicts which are only predicted by rationalist approaches to EU integration. This volume is an essential reading for anyone interested in political integration and international conflict.”
Thomas Pluemper, University of Essex

“Christina Schneider’s analysis of distributional bargaining and discrimination adds a missing piece to the enlargement puzzle. A major step ahead in theorizing the expansion of the European Union.”
Frank Schimmelfennig, ETH Zurich