Original by Dan Pagis
Translated, from the Hebrew, by Shoshana Olidort

Father, do you remember how I discovered the letters? No? Many years after I’d immigrated to Israel, one evening, perhaps in ’63 or ’64, I came for a visit from Jerusalem and I found you organizing the closet on the kitchen porch, spraying the roaches. I helped you, gladly: here was a bridge that could get us across our long silences.

And that’s when the tattered suitcase that had stood on the upper shelf fell into my hands. It was nearly empty, just a small parcel of letters inside, letters with mother’s big, generous handwriting. I saw immediately from the stamps that they were all from 1934. There, on the spot, I sat myself down on a rung of the aluminum ladder, I believe, and I read them. I was flustered. Don’t pretend that you don’t understand. Before I immigrated to Israel, at least from the age of fifteen, when I got back from the camps and started to read novels again, in short, from then until that very evening I really thought all the stories about you and mother that grandmother had told me were a lie, and that it was only in order to spare me that she had told me that when you immigrated to Israel in 1934 you had intended to send for mother and me. They told me this, I thought, in order to hide from me the fact that you had abandoned us, perhaps for another woman, perhaps for some other adventure, and only after the war you regretted it, and located me and sent me a certificate. I was silent about it all through the years, but I dreamt about it. But all that they had told me was true — it’s all in the letters, as if mother had taken pity on me and sent them again, in order to relieve me of all these suspicions. All the letters testified to the fact that you really did wait for us, that you really did prepare everything for our arrival in ’34. For thirty years, the letters were in the suitcase. I asked if you would agree to give them to me, and immediately you said, “take, take, why not,” as though you didn’t understand their importance. And maybe you really didn’t understand. Now I’ll read them to you. Like a belated, perhaps even superfluous apology for those suspicions. You ask what I’m apologizing for. Are you trying to calm me down, or are you just playing dumb? It doesn’t suit an honorable dead man like yourself. In truth, I’m not apologizing whole-heartedly: you were guilty of this prolonged forgetfulness. It didn’t occur to you to show me the letters all these years because you simply forgot them. I’ll remind you. I’ll read them to you. This is my revenge. 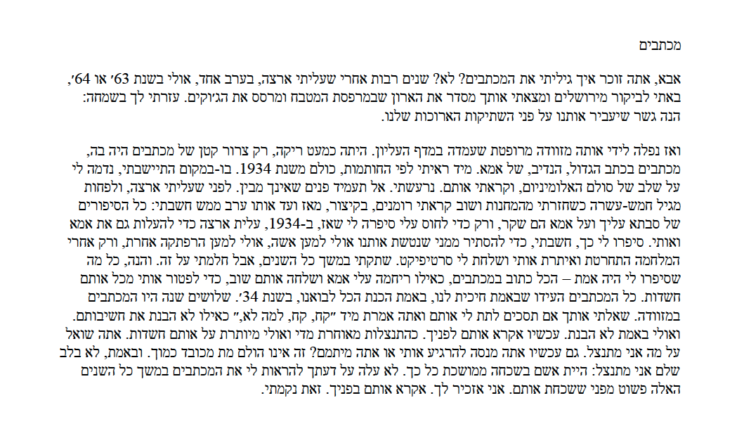 Dan Pagis (1930-1986), was among the most important modern Hebrew poets of the postwar era, and a preeminent scholar of medieval Hebrew poetry. Born in Bukovina, Romania, Pagis survived the Holocaust as a child. “Letters” comes from “Abba,” a series of prose poems that Pagis, who died prematurely of cancer, did not get to complete during his lifetime. These poems are addressed to Pagis’s father, who immigrated to Palestine in 1934, with plans to send for his wife and young son soon afterwards, plans that were altered by the sudden, unexpected passing of Pagis’s mother. During World War II, Pagis was imprisoned in a Nazi concentration camp. In 1946, he arrived in Palestine, where he was reunited with his father, after more than a decade’s separation.

Shoshana Olidort is a writer, translator and scholar, and the web editor for the Poetry Foundation. She is completing a PhD in Comparative Literature at Stanford University.

“Red Adidas? Now tell me, who wears red Adidas? No wonder he got killed,” says the one with the pigtails. (Who makes pigtails?! Are you in kindergarten or something? She must think it’s cute, Lolita or something.) One girl looks at her condescendingly, one can see the contempt in her eyes. “You think this has anything to do with the red Adidas, you dimwit?” says one girl’s best friend. The best friend is the smartest boy in the Sharon area, if not in the entire state of Israel. And one girl is also very very smart and pretty, too. One cannot disclose all the information about them here, due to discreteness and modesty. Let’s call them one girl and the curly one.

One girl and the curly one are best friends, ordinary human beings can’t even imagine this kind of friendship. It is friendship ordained from above, by blood, by poetry. They have an understanding, as they say, that goes deep. So deep that an ordinary person could drown. But they haven’t drowned, they’re good swimmers ‘cause they were sent to swimming lessons at a young age at the ‘Brawn Swimming pool’, Kfar-Saba’s public swimming pool. One girl was a bit pitiful, everything was handed to her on a silver platter, a silver platter bought at the nice department store. For others this was a privilege, for her it was a hardship, she wanted to end it all already. The curly one also got everything handed to him on a silver platter, but in a different style. He was like a prisoner in jail, they would leave him the silver platter outside his room door, knock and leave, leaving him alone with the silver platter. 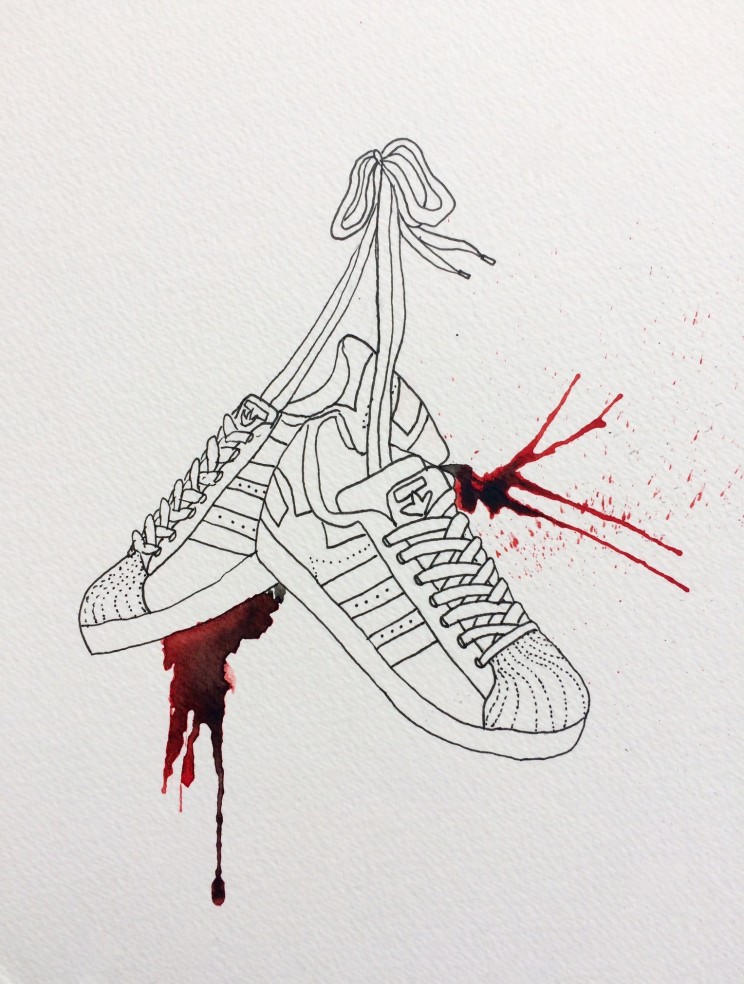 Every single day one girl and the curly one met at the mall and they loved and destroyed everything. They set their little city on fire, burned houses under heavy mortgages, air-conditioned shops and huge parking lots. They set on fire public gardens, public toilets, curtain shops and candy stores. They felt great hatred for their city, they feared never being able to get out of there, even though they would always see bus number 149 driving back and forth along Weizmann Street, taking passengers to Tel Aviv, the big city. They never took it. They would go from the mall to Ussishkin woods, from the mall to the ‘Defenders Garden’, from the mall to the Kiryat-Sapir neighborhood. The mall was their meeting place. They’d say, Let’s meet at five by the water fountain. They hated the mall.

One day they had enough. They said, Let’s do something, let’s kill, ‘cause we are kings of the world! They walked and walked around the city. The curly one said, “Who shall we kill, my dear?” One girl answered, “Anyone.” They laughed hard. And then, boom, they met someone else. Someone else says hi to the curly one and they start talking. “Have you seen this movie?”

One girl taps the curly one’s shoulder, signals someone else to wait a moment and they move away. She whispers in his ear, “Let’s kill him okay?” The curly one nods in approval but doesn’t make a sound.

One girl asks, “Do you have anything to smoke?” Someone else takes out a bag with a bud, “This weed is the shit, it grows in my parents’ yard, organic fertilizer.” One girl is impressed and the three take off together to the Rabin High School sports facility.

Darkness falls on the small city of Kfar Saba, only the white light of urban streetlights brightens the sky. The three sit by the running track, there’s no one in sight. Sometimes, fired up soldiers-to-be practice here, with fire in their eyes and fire in their arms, wanting to puff up their muscles, wanting to kill Arabs, grrr grrr grrr, but today there’s not a soul in sight.

Someone else has black dreadlocks, perfect blow-job lips, and red Adidas. One girl can’t stand it, naturally. The curly one doesn’t care, he can’t stand anything, nothing at all. One girl notices a discarded iron rod behind them, one of the sports facilities had fallen apart and no one cleared the trash. One girl taps the curly one’s shoulder, signals someone else to wait a moment, and they move away. She whispers in his ear, “Kill him with this, okay?” She points at the iron rod. The curly one nods affirmatively but doesn’t make a sound.

One girl goes back and sits down by someone else. The curly one is lagging behind them, pretending to be peeing.

“Where are you from?” she asks.

“From Hadarim,” someone else points westward.

And then, boom! Crash! What happened? Someone else’s forehead suddenly bled and now he’s dead.

“Run, Run!” One girl shouts and they run, just like that, running off from Rabin High School. Luckily, one girl’s house is really close, just a few hundred meters away. They run, skip, go up the stairs and lock themselves in the bathroom until there’s not a drop of blood left on their bodies and their breathing becomes regular. Now they swear, they swear so much. Now it’s real friendship, there’s no such friendship in the whole world.

Someone else’s body is discovered the next morning.

That night his mom was worried, she said to her husband, “Where’s someone else?” The husband said, “Pfff”, they fell asleep and whatever happened, happened.

*Excerpt from the book Kfar Saba 2000, to be published in Hebrew this year by Penn Publishing, Tel Aviv.

Julia Fermentto is a writer and journalist from Tel Aviv, Israel. Her debut novel, “Safari”, was published in Israel in 2011 and became a Bestseller. Her work has been published in newspapers and anthologies in Israel, Germany, and the United States. Her second novel “Kfar-Saba 2000” will be published in Israel in 2016. She’s a first-year graduate student in the Ph.d program and her main research interest is early 20th century Jewish-American literature.

Julia Fermentto on Autotranslation: Hebrew ceased to be a spoken language somewhere between 200 and 400 CE. Modern Hebrew, my mother-tongue was revived in the late 19th century. Being a Hebrew writer I carry this history whether I like it or not. My mouth speaks an ancient language but my life is post-modern; shopping online, eating skittles, getting bored. This tension is a great source of playfulness in my writing. In English however, this tension doesn’t exist. A new tension arose while translating this short excerpt from Hebrew to English. By undressing the Hebrew speech, my characters can be seen more clearly, which allowed me to understand their feelings much better.

In the Latest Issue