It all started at the maquila, where I got distracted checking out the girl I liked. Suddenly,
there was a burning sensation in my arm and when I turned around, it was totally gone.
Fucking mechanical press. My contractors assumed liability and payed for my prothesis, a
new arm which looks and works as if it were the original.
I’ve been using it during the last four months, but it has been creaking and it just doesn’t
grip right. I tried to find a new one but couldn’t afford it, not with my maquila paycheck.
I followed my friend’s, El Miguelón, advice, and I visited the Mariano Matamoros cyber
swap-meet. As soon as I stepped down from the calafia, I saw three vendors that displayed
“human” parts upfront. The first two, neta, were way too expensive, semi-new, they said to
me. The third one told me: “they are not new but they are really cheap”. “Pirated”, I
thought, but I didn’t care. I bought three different ones, just in case. They didn’t look too
fucked up.
At home, I try one. Fuck! It needs batteries.

By Zuriel Herrera B.

Translated, from the Spanish, by Pepe Rojo. 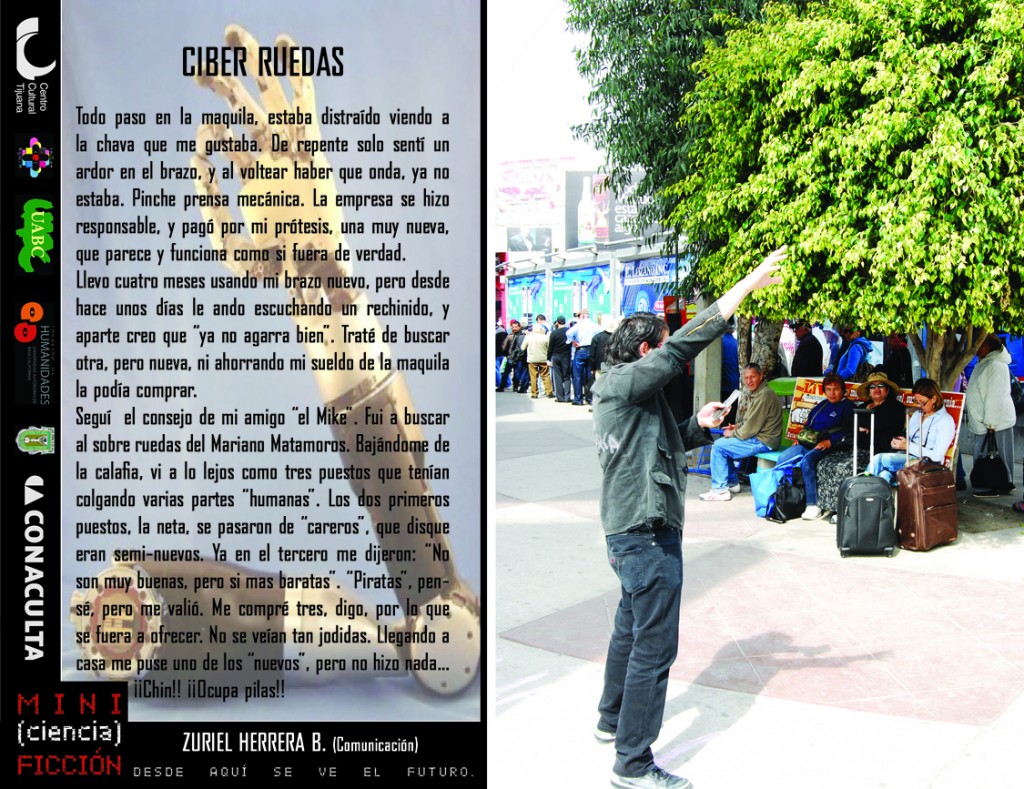 Zuriel Herrera B (Culiacán, Sinaloa; 1991) is a graduate in Communication. A video games, cci-fi and fantasy fan since he was a kid, he has tried to include these elements in his work, applying them to the environment that surrounds him. He lives in Tijuana, BC since 2005, due to economic and security situations in his hometown were aggravated, but thanks to this change, he has a broader view of what it means to live in the Tijuana-San Diego region, being inspired by all the cultural movement in these amazing cities

Pepe Rojo (1968) has published five books and more than 200 texts (short stories, essays and articles dealing with fiction, media and contemporary culture). He cofounded Pellejo/Molleja (with Deyanira Torres and Bernardo Fernández), an indie publishing firm, and edited SUB (sub-genre literature), NUMERO X (media culture) and PULPO COMICS (mex-sf comics anthology) for them. He has produced several interactive stories for Alteraction, and published two collections of Minibúks (Mexican SF and Counter-versions) at UABC, as well as the graphic intervention “Philosophical Dictionary of Tijuana”.